Oliver Armel was a Wisconsin pioneer.

"In some accounts, Oliver went by the name "Louis." Lyman C. Draper (nt. 2, Butler 69), discusses this in some detail: "In Dr. Chapman's sketch, Wis. Hist. Colls., IV, 347, the name Louis Armel is given, followed by Durrie’s, and Park's, Histories of Madison. In the treaty at Prairie du Chien, in 1829, thirty years before Dr. Chapman wrote, we find the orthography "Oliver Armell,” whose two children, Catharine and Oliver, each received a section of land from the Winnebagoes — evidently because their mother was of that tribe. At the treaty with the Pottawotamies at Chicago, in Sept. 1833, a claim of $300 was allowed to "Oliver Emmell.” De La Ronde, Wis. Hist. Colls., Vlll, 360, writes "Oliver Arimell;" and Noonan, in same volume, 410, has it "Armell.” The Illustrated History of Dane County, gives the name as "Oliver Emell,” pp. 367, 369, 402."

Oliver Armel was known by the Hocąk name, Ihoikšabᵋraga, from i, "mouth"; hoikšap, "crack"; -ra, a definite article suffix also used to form plurals; and -ga, a definite article suffix used in personal names. Hoikšap is found as a verb meaning, "to split by hitting (as firewood)." In literature, the noun form hoikšabᵋra is used to refer to Trickster's "crack," meaning the cleft of his buttocks. So i hoikšap denotes a split mouth, which would seem to refer to a cleft lip and palate, or possibly cut wounds to the mouth area.

“Oliver Armel (or Amel, also Emmell) — In 1838 this man made an affidavit that he was a native of Canada, but naturalized in the United States ten years ago, has been in the country eighteen years. About fifteen years ago he was married to E-noo-kah (or He-noo-ni-nun-ka), otherwise called Elizabeth, a full blood Winnebago. They were married according to the Indian ceremony, but, in order to save trouble regarding the legitamacy of his children, they were remarried by Esq. Mills of Madison.

During the Black Hawk War, he often acted as a spy and painted himself as an Indian. He was sent to Koshkonong by General Dodge to let General Atkinson know the number and condition of the Sauks. While he was there his house and property worth at least $800 were destroyed. The property described in the affidavit was located at Madison where Armel had a trading house. He was said to have been in the Four Lake Country as early as 1825. In 1836 he was at the Four Lakes (now Madison), where he secured his goods from traders at the Portage.

Members of the Armel family say that Armel’s wife was previously married to a Frenchman from Canada for whom she made a belt of yarn. Becoming involved in difficulty with his wife’s relatives, he fled to Canada, where Armel saw him and admired his belt. He resolved to find the maker of the belt, which he did and finally married her. Their children were Catherine, born 1824; Oliver, 1826; Louis, 1830; Joseph, 1833; Nancy, 1836 and Prosper.” (Jipson, 256)

As de la Ronde (360-361) remembers, Oliver Arimell [Armel] was present with his family for the first ever celebration of the 4th of July in Madison: "Edward Pezenne, and two or three men with him, came to the Portage in the summer of 1836. Near the end of June, I went to the Four Lakes, where the city of Madison now stands, to trade some red deer skins. I had with me Simon L'Ecuyer, Pierre and John Le Roy. We found there, A. Godin, Oliver Arimell, his squaw and three or four children, and Michael St. Cyr — Arimell and St. Cyr used to get goods from traders at Portage: and besides these, there were Charles Jalefoux and Joe Peltier, engaged in hunting and fishing. We met together, about the fourth of July, at the Lake; they had venison and fish, and we had flour, pork, tea, coffee, sugar, and whisky. John Le Roy had his violin, and we had a great feast; I believe we were the first to celebrate the fourth at Madison. I do not remember that as many white men had ever met there before."

Oliver LaMère, Armel's great grandson, told Jipson (406-407) of one of the family traditions about Oliver, known as "Crack Mouth," and his wife Raven Woman:

Cracked Mouth was a Frenchman. When the Sauks fought, he was
one of our Grandfather’s scouts, so they sent him to go to Mud Lake
(Lake Koshkonong). There he found many Hocągara living in a swamp.
Then those Hocągara said, “Your two chiefs are being held for their
benefit, and we hear that they say that they are going to attack us."
The women, and the children as well, are hungry. They are only eating
fruits and vegetables. Cracked Mouth, Whirling Thunder, and White Crow
were the three who were together. Those Hocągara told them, "Do not
become frightened, since the Big Knives will not do anything to you.
Only if you do something first will they do something." It is said that
Cracked Mouth married a Hocąk woman whom they called "Raven
Woman." They say that Raven Woman was sometimes called the
"First Born Orphan Daughter." (Text)

Although adopted into the tribe into which he married, he was always viewed as a Frenchman:

Oliver Amelle was one of the agency’s two farmers. Amelle lived
peacefully among his wife’s kin, who may have adopted him as
one of their own. When the BIA sent an official the next year to
divide and allot reservation land to Winnebago heads of families,
including his wife, Henuka, Amelle managed to receive an allotment,
intended only for Indians. Did he once again don “Indian garb” to
fool the allotting agent? No one could explain. Those who knew him
simply remembered him as the “Frenchman who wore a black hat,
high boots, a goatee and handlebars mustache” with “a niece horse
and buckboard.” (Waggoner, 11)

ask our community of genealogists a question.
Sponsored Search by Ancestry.com
DNA Connections
It may be possible to confirm family relationships with Oliver by comparing test results with other carriers of his Y-chromosome or his mother's mitochondrial DNA. However, there are no known yDNA or mtDNA test-takers in his direct paternal or maternal line. It is likely that these autosomal DNA test-takers will share some percentage of DNA with Oliver: 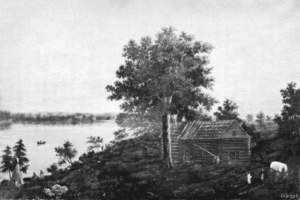