Florentine Lake
Born 1832 in Ohio
My Grandfather
In 1834, Cornelius Bedell worked with Joseph Lake (my Great-Great-Grandpa), son of Cornelius Lake (b.1808), on the Erie Canal. Expect that's where Uncle Neal got his name. Joseph died with cholera while working on the Erie Canal. He was buried on the bank of the Canal at once. This is a precaution as there were no means of stopping the disease from spreading. We only have record of grandpa having one brother, Cornelius, who died at 19 years and one sister, Martha, who died very young. Grandma Epheline Bedell Lake married a man named Malcolm Warden after her husband died. Evidently he didn't have much judgement about punishment. After dealing Grandpa Lake a severe whipping, Grandpa decided to leave. At the age of 20 years, he road horse back alone to Iowa stopping at Marion, Linn County, Iowa, and where his uncle Cornelius lived.
Grandpa lived with Bedell's and a friend when he came to Linn County at 20 years of age. Farmed in the summer and Logged in the winter with a man named Harrison Stuckslager. When Uncle Harrison was born he asked Grandma to name the baby after him. Thus Uncle Harrison's middle name. But he always signs his name H.S. A team ran away with Grandpa on the mower. He carried a huge scar on his Face from that. He traded a mule for a wind mill the first one here in 1888.
Grandma Delilah Scott Lake was born on February 22, 1835 in Knox County, Indiana. She came to Linn County, Iowa with her parents when three years old. The trip was made in covered wagon. She lived there and met Florentine Lake. They were married there in 1856[1] and lived there four years. In 1860 they came to Cottage with oxen team and Uncle Joe, Aunt Mary and Uncle Harrison.[2] Had first a log cabin then built the big house in 1876 on their farm about two miles N.W. of Cottage. At present time the Hoffman Seed Farm.
There were 10 children in that Lake family, all but one reaching the adult age with homes of their own. Uncle Harrison never married. Grandma was a hard working woman but found time for fun and took an active part in the community. She did much hard work making Christmas gifts for all her family. In January each year she was starting work for next Christmas.
They certainly saw the country change from a prairie to a farming area. He had a speculating streak in his blood. At one time he owned 900 plus acres of land. Cottage was a thriving village till the Short Line railroad went through from Iowa Falls to Des Moines. Grandpa spent much time trying to get the railroad to come through Cottage but that wasn't to be. An easier road to lay their tracks was West of Cottage. That was the beginning of Buckeye and the slow death of Cottage.
In 1904 a group of sharks talked he and others into investing in the Lilluette gold mining deal in British Columbia. It never materialized any profits but investment had to be paid. Took several acres of good land to settle the claim. When Uncle Neal married, grandpa built a home on 40 acres down by the South Fork, north of our home place. They lived there till grandpa died in 1906. House built in 1897. Grandmother Warden lived several years with Grandpa Lake till she died. Aunt Nancy Scott, grandma's sister, lived with them till she died. Both are buried in Cottage Cemetery.[3] After grandpa died, grandma came to live with my folks that grew to be about twenty two years.
Written by Esther Lake Dougan (before 2004)

Florentine Lake was born at some burg in Ohio and lived for a time in Kosciusko county, Indiana.[4] His father died when he was two years old. His mother married again, but he thought his step-father mistreated him, so he ran away from home when he was twelve years old after receiving a whipping from his stepfather. He made his home with his uncle Cornelius Bedell afterward. Subject went to Iowa alone on horseback when about twenty years of age. His uncle Cornelius Bedell having gone there first and worked for a Mr. Harrison Stullschlager at logging in winter and worked on farms in summer.
He was married to Delilah Scott on 10 April 1856 at Marion in Linn county, Iowa,[5] where they farmed four years. Coming to Iowa Falls in Hardin county, Iowa on 15 April 1860 in covered wagons.[6] They farmed here till 1897 where they and their children farmed several hundred acres of land.[7][8][9][10] Some of this land was given to their children and a large amount of it was lost when he invested it in the Lilluet Gold Mine on the Faiser River in British Columbia, Canada. Reverend Mullholland was one of their agents and Byron Bliss, another. Subject sold 160 acres of land and put $16,000 in the mine. He made a trip to see this dredge at work in 1904, two years before he died.
About the year 1881, he was badly hurt on a mowing machine. His jaw was broken twice and left a deep scar on his left cheek. He was either sun-struck while oiling the machine or a horse kicked him in front of the machine.
At one time he owned several hundred acres of land near McHenry, North Dakota. In 1897, he and his wife, Delilah, retired to a new house that they built on a 40-acre pasture that they owned on the south side of the creek near their son, James', farm and three miles from their old home farm.[11] Neal Lake farmed the home place a short time until it was sold to Ace Gilbert for $72 per acre. The Gilbert's son, Dewey lived there many years. Their first dwelling in Hardin county was a 16' X 20' log house. Later in 1874 they built a large frame house 28' X 28' that was a fine house for this country. An addition was built in 1885 on the west side of this house, which included a kitchen, porch and woodshed. They bought a windmill of R Ballard of Radcliffe and put it up in 1888, the first one around here. Traded a mule for it.
Written by Elsie June Lake Neuenfeldt (before 1995)

Is Florentine your ancestor? Please don't go away!

ask our community of genealogists a question.
Sponsored Search by Ancestry.com
DNA Connections
It may be possible to confirm family relationships with Florentine by comparing test results with other carriers of his Y-chromosome or his mother's mitochondrial DNA. However, there are no known yDNA or mtDNA test-takers in his direct paternal or maternal line. It is likely that these autosomal DNA test-takers will share some percentage of DNA with Florentine: 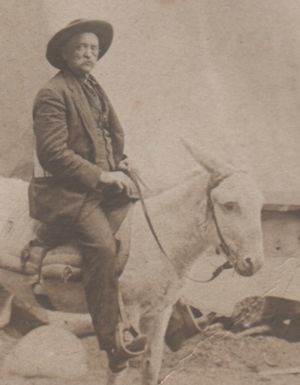 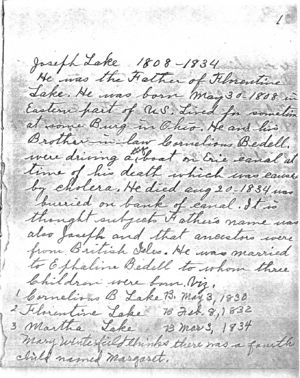 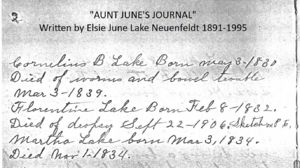 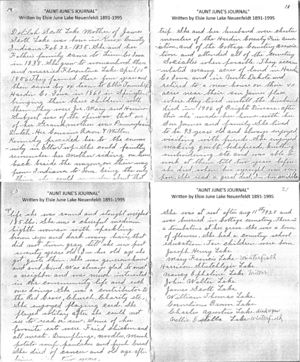 Florentine Lake on the left 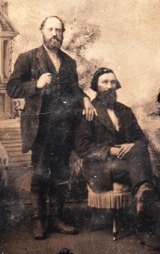 Steve Lake
A historical novel is being written about Florentine's trip to British Columbia in 1904. As that project progresses, I am thinking of creating a free space page to highlight parts of the book, to set goals and to keep updated on any details submitted by contributors.

The book will have two parts. The first being a first-person story about the trip. The second will be genealogical information on the cast of characters in the story.

The story of his trip hatched from short life sketches written by two of his granddaughters. Beyond those, historical resources were found in order to give authentic context to the 1904 setting. The narrative alternates between his activities and conversations on and off of the train, and his musings and memories as the landscapes passes slowly by. Suggestions will be offered as to why he took this trip and other important issues involving his investment in a gold dredging company. Possible answers will be posed as a mystery investigation and evidence gathering. The facts actually turned up in two court cases, one in regional court and the other in federal court, and the supposition is that Florentine may have contributed.