Šāgᵋnįka was born about 1815. The date of his birth is purely speculative, based on that of his wife.

The Marriage License of his son, Jacob Russell, states that his father was "Little Claus," clearly a corruption of "Little Claws." In Hocąk, this name would be Šāgᵋnįka, from šāk, "claw, fingernail"; nįk, "little, small"; and -ka, a definite article suffix used in personal names. This is a name that could belong to either moiety.

He passed away before 1900 since his wife is mentioned as the mother of Jacob Russell in the 1900 Federal census but no listing of her husband or his father is found there.

Is Šāgᵋnįka your ancestor? Please don't go away!

ask our community of genealogists a question.
Sponsored Search by Ancestry.com
DNA
No known carriers of Šāgᵋnįka's DNA have taken a DNA test. 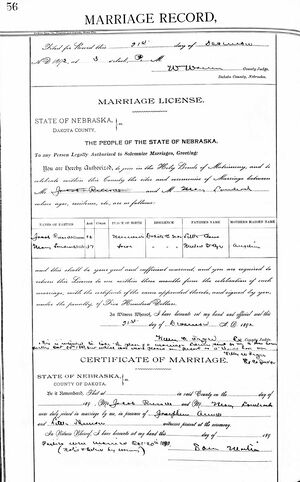