[send private message]
This page has been accessed 1,154 times.

According to the Del Norte County History Society, what is now known as the Brother Jonathan Cemetery/Memorial was the original Masonic Cemetery. The land was purchased by the Masons on 26 Feb 1854. The first official burial was two days later of Master Mason N. W. Springer. Two months later the "most important" burial occurred for Grand Warden Rev. Saschel Wood in April, 1854. Both of these men were reintered in the present day Masonic Cemetery on Cooper Street in Crescent City, Del Norte, California. (This cemetery is actually four different cemeteries in what is called the Crescent City Cemetery. It includes the Old and New Masonic Cemeteries, the IOOF Cemetery, the Veteran's Cemetery, and the Catholic Cemetery.)

When the original Masonic Cemetery was opened it was only for the burial of Masons. In 1855 it was opened to all.

Regarding the sinking of the "Brother Jonathan", some say 90 bodies came ashore. They were taken to Dugan & Walls Warehouse prior to burial. Each headstone stated, "Sacred to the Memory of ____________, Lost on the Brother Jonathan, July 30, 1865. Records show that 45 bodies were buried and a number claimed by family members and interred elsewhere. It is said that there is a mass grave of 66 unidentified victims in the cemetery.

According to the "Del Norte Record" of 17 Sep 1881 and 9 Feb 1884 there was a section in the cemetery for Native Americans and a section for the Chinese in the area. In my interview with Karen at the Del Norte County Historical Society, she stated that there was a work agreement with the Chinese that stated that should any of them die while in the area they would be buried in the local cemetery until they could be reintered back in China. (These were persons who were here for work and not citizenship). Karen also stated that often holes would be found in the Chinese section where these bodies had been dug up to be sent back to the home country. Karen also told me that there was some conflict among the "old-timers" as to whether or not there were Native Americans buried in this cemetery.

So much of the history of this cemetery is lost because before 1880 no cemetery records were required to be kept. Later cemetery records were lost in a fire in 1948. The County Courthouse had no records until 1905. As cited above, the first headstone was placed in 1856; the last in 1906. The original Masonic Cemetery was the only cemetery in Crescent City for thirty to forty years.

Unfortunately, over the years the cemetery "went to seed". It was overgrown, headstones were broken and/or missing, there was vandalism. It was considered haunted and children would take a wide berth when having to walk in the area.

There was a renovation of the area sometime in the 1950s. The Brother Jonathan Cemetery/Memorial was founded in 1955. As many family members as could be identified, were contacted about reinterment of the bodies buried in this cemetery. Some were reburied in the newer Crescent City Cemetery, others were taken elsewhere. Many are still where they were originally buried, now in unmarked/unknown graves. The original boundaries of the Old Masonic Cemetery are not certain today although there is speculation. About the center of where the cemetery was is now the Brother Jonathan Park which surrounds the Brother Jonathan Cemetery/Memorial. The majority of the cemetery has been redeveloped with housing and roads. Many of the graves are still under this area, but identification has been lost to time. There have been times during this development when coffins have been uncovered.

The 28 gravestones that are formed into a circle around the flagpole at the Memorial are the few that could be salvaged at the time of the redevelopment. I believe these stones used to be erect, but are now laying flat. Also, they are not marking the spot where the bodies were actually buried. As you walk around these headstones, you find that family members are not necessarily near each other. It appears that when the Memorial was built they used the "good" headstones. Each of those people are still in the ground in the area, but their actual burial spot is unknown.

Here is a short list of some who were originally buried in the Old Masonic Cemetery, but were later moved to the Crescent City Cemetery:

There is one headstone kept in the basement at the Del Norte County Historical Society which is in pieces. It is for:

Brother Jonathan Cemetery is an actual cemetery but is not inclusive to only victims of the shipwreck. It was the original cemetery in Crescent City.

This memorial is dedicated to those who lost their lives in the wreck of the Pacific Mail steamer Brother Jonathan at point St. George's Reef, July 30, 1865. The ill-fated Brother Jonathan, a steam-driven side-paddle wheeler was lost in stormy seas. It went down four miles off Point St. George, just north of Crescent City.

With the loss of over 200 lives, the wreck of the Brother Jonathan remains the worst shipping disaster on the Pacific Coast. Only nineteen people survived. Some of the victims were buried in the old cemetery where a memorial now stands.

There are 28 gravestones placed in a large circle with the flag of the United States standing at the head of the circle (see photo). The circle is divided into four sections with seven headstones in each section. The cemetery/memorial is a small park just across Pebble Beach Drive from the Pacific Ocean.

Daniel C. Rowell (drowned in the wreck of the Brother Jonathan)

Polna Rowell (drowned in the wreck of the Brother Jonathan) 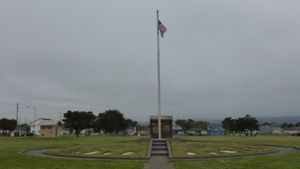 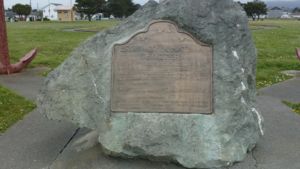