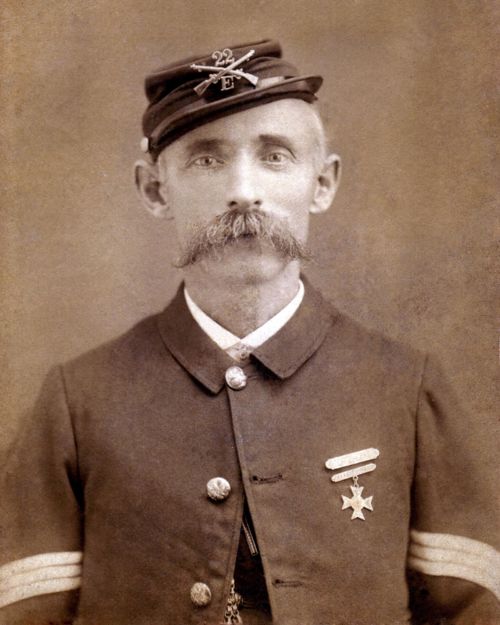 Mark (Swan) Swanson
Swanson Family Album. This photo could have been taken before North Dakota became a state. It was sent to William Fischer's niece, Anna Mohr. In 1935 it was given to Anna Mohr's grandson, Fred Swanson, by his grandfather, and in 1975 it was given by Fred Swanson to his son, Mark Swanson.

This photo tells a lot about William Fischer. The cap insignia indicates that he was a part of Company E of the 22nd Infantry stationed at Fort Totten, Dakota Territory. The 3 stripes show he was Sergeant Fischer. The medal is not yet identified but could be a marksman badge. The rear of the photo is stamped "A. S. Bratlee, Photographer, views of Devils Lake and vicinity a specialty, negatives preserved for future orders, Devils Lake, Dak". On November 2, 1889 North Dakota was admitted to the union as the 39th state. William Fischer's military service records show he was stationed at Fort Totten between May 1888 and July 1890.

posted Feb 18, 2017 by Mark (Swan) Swanson
You do not need to choose from the automatic place name suggestions. We aim to enter location names that people used in their own time and language. See Language Selection and Location Fields for more info.