Alexander Pushkin was one of Russia's most famous poets and playwrights, as well as credited with creating the modern Russian language.[1][2][3]

Алекса́ндр Серге́евич Пу́шкин was born about 1799 (26 May old style; 6 June by western calendar), and was the son of Sergei Lvovich Pushkin & Nadezha (Nadya) Ossipovna Gannibal, who were both of noble families.[2] His lineage is outlined to some degree on wikipedia. [1]

Alexander married Natalia Goncharova and together they had four children: Maria, Alexander, Grigory, and Natalia, who married into the royal house of Nassau and became the Countess of Merenberg.[2] The husband of her granddaughter Nadejeda, was the uncle of Prince Philip, the Duke of Edinburgh, and husband of Queen Elizabeth II. [1] Alexander adored Natalia, but so did one George D’Anthès-Heeckeren, a French royalist.[2] Eventually Alexander challenged him to a duel to finish the conflict, but lost.[2]

Alexander started writing poetry while still a youth attending the aristocratic school, Lyceum at Tsarskoe Selo.[2] He didn't have a particular specialty at the time and his interests were varied, including Russian Neoclassicism and French works.[2]

Following his graduation, Alexander moved to St. Petersburg and spent his time enjoying the social life.[2] His works from this time reflect his disdain for government officials.[2] His first major work was created during this time; a fairy tale based on Russian history, Ruslan i Liudmila.[2]

Not long after publishing the poem, Alexander went into exile in Southern Russia due to his political views, sympathizing with Decemberists, who were pushing for a constitution and social freedom.[2][3] He continued to publish poems, but his next major work, Evgeny Onegin (Eugene Onegin).[2] which was considered his masterpiece, took him seven years to write. Alexander invented a new poetic stanza for the work, the iambic tetrameter with alternating feminine and masculine lines.[2] Though not intentionally autobiographical, the poem ended up being so, as the poem's protagonist, Eugene, also dies in a duel.[2] It also is considered an "encyclopedia of Russian life", putting into words what life was like during Alexander's lifetime.[3]

Pushkin's theme set the theme for many Russian artists to come - the suffering of the simple man over the oppressive upper class; the pressure to choose what is right over what feels good, which inspired Tolstoy, Dostoyevsky, and Chekhov.[3]

Alexander died January 29, 1837 from injuries received in a duel fought two days earlier, where he had challenged his wife's sister's fiancé, George D’Anthès-Heeckeren, who was infatuated with Alexander's wife, Natalia.[1][2] Alexander's funeral was held in a small church, and attendees were required to present a ticket for admittance.[2] He was buried next to his mother at Svyatye Gory Monastery.[2]

A statue of Alexander Pushkin was unveiled in Moscow in 1880.[2]

Sponsored Search by Ancestry.com
DNA
No known carriers of Алекса́ндр's DNA have taken a DNA test. 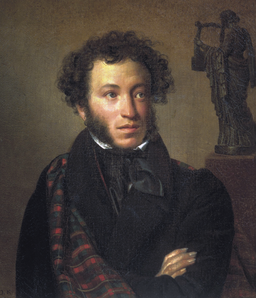 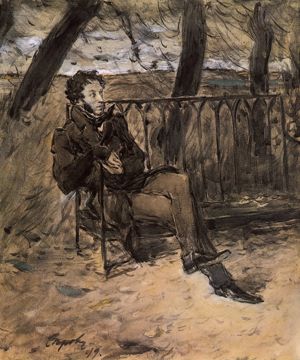 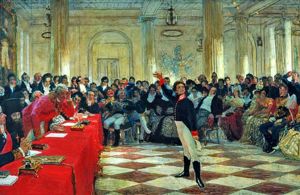 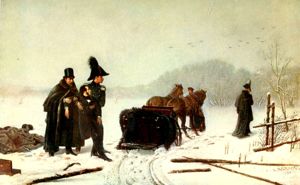 Geni has her going back to a common ancestor Margaretha von Dönhoff, whose parents were my ancestors 7 to 8 times over, and ancestors of virtually all the royals