Cixi was born in Peking under the name of Xingzhen on 29 November 1835, the daughter of Huizheng of the Yehe Nara clan. As Yi, she was a concubine and noble consort to the Xianfeng Emperor, with whom she produced a son, Zaichun, on 27 April 1856. After the death of the Xianfeng Emperor, their son acceeded to the throne as the Tongzhi Emperor, and Yi became Empress Dowager Cixi.

During the reign of her son, Cixi ousted several regents appointed by the previous Emperor, and she assumed regency. She implemented a series of reforms for the Ch'ing Dynasty known as the Tongzhi Restoration during her regency. Contrary to the traditional rules of succession of the Qing Dynasty, Cixi installed her nephew Zaitian as the Guangxu Emperor after the death of her son in 1875.

Throughout her regency, Cixi was the de facto ruler of China from 1861 to 1908, even when her son and nephew ruled as Emperors in name only. After implementing the Tongzhi Restoration, she made several technological and military reforms to preserve her power and extend the Qing Dynasty for a few more years. She died in Peking on 15 November 1908, one day after the death of her nephew, leaving Puyi to be installed as the Xuantong Emperor, who would effectively become the last Emperor of China until the overthrow of the Qing Dynasty in 1912.

Is 慈禧 your ancestor? Please don't go away!

ask our community of genealogists a question.
Sponsored Search by Ancestry.com
DNA
No known carriers of 慈禧's DNA have taken a DNA test. 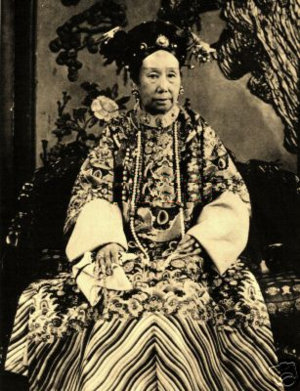 We are featuring Cixi alongside Prince Philip, this week's Example Profile of the Week, in the Connection Finder on April 14, in honor of his recent death, with the theme of royalty. Between now and then is a good time to take a look at the sources and biography to see if there are updates and improvements that need made, especially those that will bring it up to WikiTree Style Guide standards. We know it's short notice, so don't fret too much. Just do what you can. A Team member will check on the profile the day before the Connection Finder is updated and make last minute style-guide changes as necessary.