Hirohito, Prince Michi, was born in Aoyama, Minato, Tokyo, Japan, on 28 April 1901. He was the son of then-Crown Prince Yoshihito and Crown Princess Sadako. He was a member of the Imperial Family.

70 days after his birth, Prince Michi was removed from the imperial court and placed under the care of the family of Kawamura Sumiyoshi, who was to raise him as if he was his grandson. After Sumiyoshi's death, Michi and his brother, Yasuhito, then Prince Atsu, were returned to the imperial court. Prince Michi studied at Gakushūin from 1908 to 1914.

His father assumed the throne as Emperor in 1912 when Michi's grandfather died. At the same time, Michi was commissioned into the military, eventually rising to the rank of Colonel in the army and Navy Captain in the navy. He was formally proclaimed the Crown Prince on November 2, 1916.

In 1921, the Crown Prince toured Western Europe for six months. Upon returning to Japan, he was made Regent to his ailing father who had a mental illness.

On 27 December 1923, Daisuke Nanba made a failed attempt to assassinate the Crown Prince in the Toranomon incident. Daisuke was executed for his role in the incident.

On 26 January 1924, the Crown Prince married his 14th cousin 3x removed Princess Nagako Kuni. Their first daughter Shigeko, Princess Teru, was born on 6 December 1925. She married Prince Morihiro Higashikuni on 10 October 1943. However, she left the Imperial Family in 1947 as her husband was demoted to commoner status.

On 25 December 1926, the Crown Prince succeeded to the throne upon his father's death, thereby beginning the Shōwa period in Japanese history. His second daughter, Sachiko, Princess Hisa, was born on 10 September 1927, but died suddenly on 6 March 1928. Another daughter, Kazuko, Princess Taka, was born on 30 September 1929, and married a commoner, Toshimichi Takatsukasa, on 21 May 1950. After that, he had another daughter who left the Imperial Family upon marrying a commoner named Takamasa Ikeda.

The Emperor led Japan through World War II. On 15 August 1945, he delivered a surrender speech to the people of Japan. Japan then came under the occupation of the United States of America. The Emperor chose his uncle, Prince Naruhiko Higashikuni, to assist the American occupation as Prime Minister. However, Naruhiko resigned shortly after. There were several attempts by world leaders to put the Emperor on trial for war crimes, but Douglas MacArthur insisted that he retain the throne.

Although the Emperor was not put on trial, he explicitly rejected the claim that he was a divine descendant of Amaterasu. By 1946, he was no longer the imperial sovereign, but the constitutional monarch, as a new constitution was adopted. He remained an active figure after the end of World War II up until his death.

On 22 September 1987, the Emperor was hospitalised for digestive problems by undergoing surgery on the pancreas, eventually being diagnosed with duodenal cancer. Although he seemed to make a recovery, on 19 September 1988, he collapsed in his palace as he underwent internal bleeding for several months.

At 7:55 AM on 7 January 1989, the Emperor's death was officially announced by Shoichi Fujimori, thereby ending the Shōwa period. He was posthumously renamed Emperor Shōwa on January 31. On February 24, Shōwa's funeral was held in a formal manner. He is buried in the Musashino Imperial Graveyard in Tokyo.

Upon his death, Shōwa was succeeded to the throne by his eldest son.

Is 昭和 your ancestor? Please don't go away!

ask our community of genealogists a question.
Sponsored Search by Ancestry.com
DNA
No known carriers of 昭和's DNA have taken a DNA test. 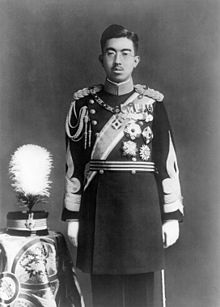