The Abbe-Abbey Genealogy says that John Abbe was born in England about 1613. His ancestry is unknown but this book speculates that he was born in one of the interior and central counties of England. It is probable that he was related to the Abbye family of Staverton, Northampton, England. The parish records at Stoke Bruerne, Northampton reveal many marriages of Abbyes recorded there during the 16th and 17th centuries. [1]

He migrated sometime before November 11th, 1636 as at that time he was granted land as an inhabitant of Salem, Massachusetts Bay Colony.[2]

He seemingly came to New England in 1635 aboard the "Bonaventure" for his name is recorded on this list as Jo: Abby, aged 22, quoted:

"Passinger wchPassed from ye Port of London. Theis vnder written are to be transported to Virginea imbarqued in ye Mercht bonaventure James Ricrofte Mr bound thither have taken yeoath of Allegeance."[3]"Abbe Genealogy" postulates that "it is a well-known act that many of the early ships destined for Virginia landed many or all of their passengers at other ports, even in New England, and records of the name of John Abbe begin in New England about that time."[1]

At Enon (renamed Wenham, Essex, Massachusetts in 1643) he was granted land in 1642/3[5] when previously he had sold his land near Basse River in Salem to Michael Sallows.[1]In 1644 it was agreed that John Abby "shall have all that wastground which lyeth between ye end of ye lott which he lives upon and ye meadow which belongs to iye town, leaving a poles bredth most convenient for a way."[1]In 1661 Wenham granted land to him and Edward Waldron.[1]He continued to farmed and resided in Wenham, Massachusetts the rest of his life.[5]After reviewing the land grants, the authors of "Abbe-Abbey Genealogy conclude that "he was of the same standing in the community as the great majority of the early inhabitants" since smaller grants were given to those who were poorer and less able to develop the land.[1]

John's 1st wife was Mary (_____), her surname is unknown.[5][7][8] She was born in England [1]and died in Wenham on September 9, 1672.[5] According to the Abbe-Abbey Genealogy, Frederick Orr Woodruff identified her name as Mary Loring and says that the "name was found on Enfield [presumably England] records by one who made researches for him there."[1] However, the author's must not have placed much credence in the name Loring since they identified her as Mary _____.

Children of John and Mary

Thomas lived with and had been supported by his father, in exchange Thomas cared for him as he aged. However in 1683 Thomas, who had been exhibiting bad behavior, was dismissed by his father and John Abbe Jr. took charge of his father's affairs. John Jr. build a new house "as the old one was unfit to live in."[1]

To seal this transaction, on 3 August 1683, John Sr. filed the following writ (the spelling has benn modernized):[1]

"Know all men by these presents that I, John Abbey (Senr.) of Wenham in the County of Essex, being sensible of my own and my wife's inability to carry on my affairs so as to provide for our Comfortable Livelihood by reason of our age and weakness of body ... do make Choice of and request my son John Abbey as my feoffee in trust to take into his hands my house & all my lands in Wenham together with what right I have in that land which was sometime Richard Gooldsmith's, to occupy and improve for my and his mutual benefit so long as my wife and I or either of us shall live, and for his encouragement to manage my affairs as abovesaid and he provide comfortably for my own and my wife's maintenance I do hereby give and bequeath to him my aforesaid feoffee all my houses & lands forever except what I do hereby give out of it to the rest of my children, viz. Samuel, Sarah, Marah, Rebeca, Obadia, and Thomas, and to each of them as follows: viz. to Samuel, I having already given him ... land, I give him one shilling more, and to all the rest of my children above mentioned, viz. Sarah, Marah, Rebeca, Obadia, and Thomas two Shillings apiece or to so many of them as shall survive at the decease of my self and wife: and in case God shall take away my son John abovesaid before the decease of my self and wife, if his heirs shall continue to manage and carry on my affairs as my abovesaid feoffee ought to do, then they shall have the houses and lands abovesaid as therein ordered, and in confirmation of what is above written I have hereunto set to my hand & seal. Signed sealed and delivered August the 3, 1683, in the presence of
Thos. Fiske, Sr. [and]

"John Abbey Sr. did acknowledge this writing above written to be his act and deed August the 3d, 1683, before me

In 1696, after the death of his father and step-mother, John Jr. sold the lands in Wenham to Nathaniel Waldron and removed to Windham, Connecticut, where he died on 11 December 1700. At that point, John Senior's son Thomas, then of Enfield, Connecticut, laid claim to his father's estate, naming his father-in-law, Walter Fairfield of Wenham, his attorney. For some reason (possibly because John Jr. failed to probate the will his father signed in 1683), the court determined that John Sr. had died intestate and granted administration of his estate to Thomas (December 1702). The estate, valued including the property, was valued at £92. Thomas finally settled the estate.

"This Inventory of the Estate of John Abe Senor formerly of Wenham deceased about thirteen yere since Intestate we who names are her unto subscribed on this twenty fourth of febuary… 1702/3 did at the Request of Thomas Abee one of the sons of the decesed and Administrator of his fathers estat… apprise the said deceased his house and land in Wenham on which… he lived for many yers… as we ever understood we being his nere neighbors for many yers… his homsted being about twenty and three acers of upland and medow together with the housing and fences… with his Right in the Comon all which we vallewed at ninety and two pounds… We also being Informed that the sayd deceased in his lifetime did to accommodate his son Obadiah according to his desire with a trade for his futer benifett when the sayd Obadiah was eighteen yers old give to Richard Goldsmith three yers sarvit of his said son Obadiah and until he was one and twenty yers ould to learne him to be a shoemaker and all the sayd time his sayd father did find his sayd son meat and drink and Clothes washing and Lodging which we doe Judg to be worth thirty pounds…. 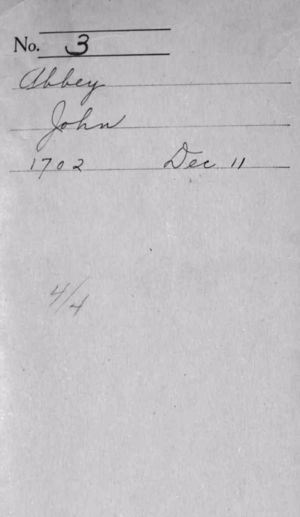 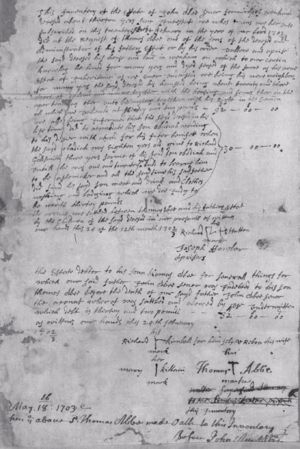 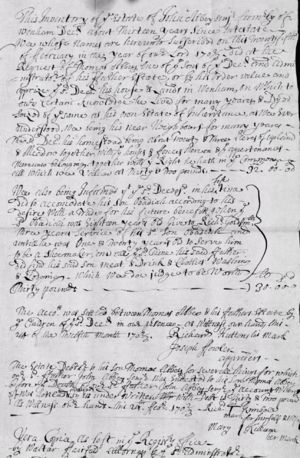 Cheryl (Aldrich) Skordahl
PGM leader please lift the PPP from this profile so parents can be detached. Thanks.

See comment (with no response) from May 2018. I have placed notice of detachment on profiles involved.

Cheryl (Aldrich) Skordahl
Very good find, Chris. I added it as a source and pointed it to the marriage paragraph - name Mary Unknown - not Loring.

For those who may not know, "Early New England Families" are currently being written by Williams who is a reputable NEHGS genealogist.

Lydia, Bonnie, Mike - what do you think about this recent work?

posted May 30, 2018 by Cheryl (Aldrich) Skordahl
Chris Hoyt
The most recent reference I found, even identifies the first wife as Unk -and (not Loring either), in addressing daughters Rebecca and Marah in

I found no scholarly source for the marriage of John Abbe (the immigrant) to Mary King.

It is my belief that both Mary Perkins and Mary King should be detached, with notes left on the profiles (and on this profile.)

Mary Goldsmith-7 Abbe could possibly have surname of Perkins or King??? Or else -7 should become Unknown surname then attached to Abbe-11.

Cheryl (Aldrich) Skordahl
finding no source for the parents, plans are in the works to detach them, notes are now present on all three profiles. Abbe-13, Abbe-11, Unknown-154004.

Cheryl (Aldrich) Skordahl
I'm going to work on this profile in answer to g2g here:

I see he does not have a profile in Anderson. Is he in the GM Directory? If so, will someone PM me with the information?

I'm going to start the bio with info from Essex Antiquarian.