Alternatives given by others included the Patria, attributed to George Codinus, which claims Theodora came from Paphlagonia. [1]

According to Michael the Syrian her birthplace was in Mabbug, Syria. [3]

Theodora's father, Acacius, was a bear trainer of the hippodrome's Green faction in Constantinople. He died when she was 4. [4] Her mother, whose name is not recorded, was a dancer and an actress.[5]Her parents had two more daughters.[6]

Procopius wrote in his Secret History that Theodora followed here sister Komito as a worker in a Constantinople brothel, serving low-status customers. Later she performed on state. [7] In Procopius' account, Theodora was known for her salacious portrayal of Leda and the Swan.[8] Employment as an actress at the time would include both "indecent exhibitions on stage" and providing sexual services off stage. [1]

"Michael the Syrian, the Chronicle of 1234 and Bar-Hebraeus place her origin in the city of Daman, near Kallinikos, Syria. They contradict Procopius by making Theodora the daughter of a priest, trained in the pious practices of Miaphysitism since birth. These are late Miaphysite sources and record her depiction among members of their creed. [9] These accounts are thus usually ignored in favor of Procopius. [10]

At the age of 16, she traveled to North Africa as the companion of a Syrian official named Hecebolus when he went to the Libyan Pentapolis as governor.[11]

Theodora stayed with Hecebolus for almost four years, at which point she was maltreated and abandoned by him. En route back to Constantinople she settled for a while in Alexandria, Egypt. There she is said to have met Miaphysite Patriarch Timothy III and converted to that version of Christianity. She then travelled to Antioch where she met "Macedonia", a dancer of the "Blue Faction" who was perhaps an informere of Justinian. [1]

Returning to Constantinople in 522, giving up here former lifestyle and settling as a wool spinner in a house near the palace. [12]

Theodora caught Justinian's eye and he sought to marry her. However, a law from the time of Constantine specifying that those of senatorial rank could not marry an actress prevented him. By 525 Justinian was in a position to repeal the law, and married Theodora. [11]

When Justinian succeeded to the throne in 527, Theodora became Empress of the Eastern Roman Empire. Theodora shared in his plans and political strategies, participated in state councils, and Justinian called her his "partner in my deliberations." [13]

Theodora had her own court, her own official entourage, and her own imperial seal.[14]

She reigned as Theodora Aubusta, Empress of the Byzantine Empire from 9 August 527 (the date of her coronation) to 28 June 548. She was one of the more influential and powerful empresses of Rome.[1]

532 The Nika Riots and Theodora's Speech

In 532, the Empire's two rival political factions, the Blues and the Greens, started a riot during a chariot race in the hippodrome. Rioters set public buildings on fire and proclaimed Hypatius, nephew of former emperor Anastasius I, a new emperor. Justinian and his officials prepared to flee. Theodora interrupted their deliberations and spoke:

My lords, the present occasion is too serious to allow me to follow the convention that a woman should not speak in a man’s council. Those whose interests are threatened by extreme danger should think only of the wisest course of action, not of conventions. In my opinion, flight is not the right course, even if it should bring us to safety. It is impossible for a person, having been born into this world, not to die; but for one who has reigned it is intolerable to be a fugitive. May I never be deprived of this purple robe, and may I never see the day when those who meet me do not call me empress. If you wish to save yourself, my lord, there is no difficulty. We are rich; over there is the sea, and yonder are the ships. Yet reflect for a moment whether, when you have once escaped to a place of security, you would not gladly exchange such safety for death. As for me, I agree with the adage that the royal purple is the noblest shroud.[15]

Swayed by her speech, Justinian ordered his loyal troops into action, killing over 30,000 rebels in the Hippodrome and putting Hypatius to death.

In the years after the Nika revolt Justinian and Theodora [1]

Theodora engaged in matchmaking, forming a network of alliances between the old powers, represented by Emperor Anastasius' family and the pre-existing nobility, and the new, who were Justinian's and her relatives. [1]

Theodora worked against prostitution, closing brothers, making pimping a criminal offence, buying girls to set them free, and creating convents and workplaces to provide for their future. In a critical view of this, Procopius' Secret History asserts that she rounded up 500 prostitutes and confined them to a convent without consulting them; they sought to escape by jumping over the walls. [11]

Theodora died of what Victor of Tonnena described as "cancer" on 28 June 548 at the age of 48. Both Theodora and Justinian are represented in mosaics that exist to this day in the Basilica of San Vitale of Ravenna, Italy, which was completed a year before her death.

Theodora's death is recorded by Victor of Tonnena, with the cause uncertain but the Greek terms used are often translated as "cancer." The date was 28 June 548 at the age of 48.[16]

Along with her spouse, she is a saint in the Eastern Orthodox Church, commemorated on November 14. [1]

At the time of the Theodora's marriage to Justinian, she had a daughter whose name has been lost. Justinian treated the daughter and the daughter's son Athanasius as fully legitimate, [17] although sources disagree whether Justinian was the girl's father.

She was the mother of two illigitimate children [1]

Theodora's contemporary, the historian Procopius, is the main historical source for her life. In 1545 The Wars of Justinian "paints a picture of a courageous and influential empress who saved the throne for Justinian. [1]

Procopius later wrote the Secret History, which is seen to express a deep disillusionment. In the work "Justinian is depicted as cruel, venal, prodigal and incompetent." Theodora receives a "titillating portrayal of vulgarity and insatiable lust, combined with shrewish and calculating mean-spiritedness."[1] At the same time, however, Procopius wrote Buildings of Justinian "which paints Justinian and Theodora as a pious couple and presents particularly flattering portrayals of them. Besides her piety, her beauty is praised within the conventional language of the text's rhetorical form. Although Theodora was dead when this work was published, Justinian was alive, and perhaps commissioned the work. [18]

John of Ephesus, who lived about the same time, wrote about Theodora in his Lives of the Eastern Saints as the daughter of a pious Monophysite priest. He mentions an illegitimate daughter not named by Procopius. [10]

Is Theodora your ancestor? Please don't go away!

ask our community of genealogists a question.
Sponsored Search by Ancestry.com
DNA
No known carriers of Theodora's DNA have taken a DNA test. 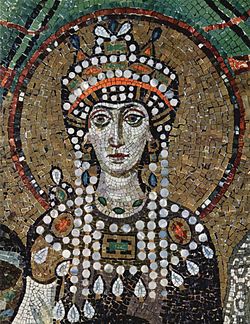