Note: Elizabeth Mary ACKLEY and Abel SHAYLOR were married on 19 May 1696 in Haddam, Middlesex, Connecticut.5,25 LDS spelles his last name Shalor also lists marriage about 1681 and has Elizabeth as of Farmington, Hartford Co., CT

Abel SHAYLOR26 (son of Thomas SHAYLOR and Marah SPENCER) was born on 14 Jun 1673 in Haddam, Middlesex, Connecticut.27 He died about 1744 in Bolton, Tolland , Connecticut.27,28 ABEL SHAILER, the son of Thomas Shailer and Marah Spencer, was born on 14 June 1673 in Haddam, Connecticut. He died on 19 September 1744 in Bolton, Connecticut, and is buried near the Haddam Courthouse. He married (1) Elizabeth Ackley, the daughter of Nicholas Ackley, who died between 20 March 1697 and 5 January 1698. On 5 January 1698 he married (2) Mary Parents, the daughter of John and Elizabeth Parents (first settlers in Haddam) who died in 1705. He married (3) Hannah on 7 August 1706. They moved to Bolton about 1718. Abel owned a farm south of Bolton Center on the main road to Hebron. He was a farmer and prosperous landowner. He was survived by his wife, Hannah, who died in 1770. His will is dated 20 December 1742, and was proved on 6 November 1744 according to the Records of the Hartford Probate Court.[8] 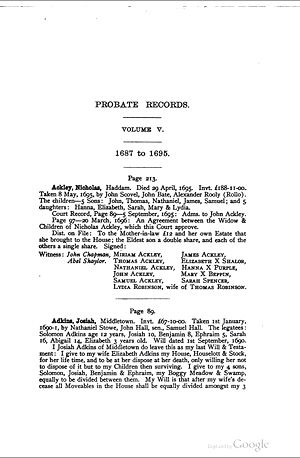 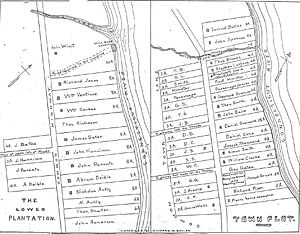 Jillaine Smith
Mike, is there a good reason to retain PPP? New rules introduced last year require a project be associated with and be co-managed by a project if a profile is PPP but perhaps PPP isn't needed here? What do you think?
posted Oct 07, 2018 by Jillaine Smith

Mike Ackley
Ackley-72 and Ackley-769 appear to represent the same person because: I believe these two Elizabeth Ackleys are the same person; daughter of Nicholas and Hannah, born in the same year.
posted Jan 22, 2016 by Mike Ackley

Elizabeth is 37 degrees from Louis Braille, 16 degrees from Greta Moody and 13 degrees from Henry VIII of England on our single family tree. Login to find your connection.