Robert Adam is a member of Clan Adam.

Robert was born in July 1728 to William and Mary (Robertson) Adam, he was one of ten children for the couple. Robert had an illustrious career, he never married.

Robert and his brother James went into business together with a large part of the focus being architecture, they developed what came to be known as "The Adam Style"

Robert was trained by his father, William who was known as the premier architect of his time and he trained Robert. Robert's brothers became architect also, eventually, they went into business together

Robert was a recipient of:

Fellowship of the Royal Society (FRS, ForMemRS & HonFRS) is an award and fellowship granted by the Royal Society of London to individuals the society judges to have made a: substantial contribution to the improvement of natural knowledge, including mathematics, engineering science, and medical science.[1] ”Isaac Newton was one of the earliest Fellows of the Royal Society, elected in 1672Fellowship of the Society, the oldest scientific academy in continuous existence, is a significant honour which has been awarded to many eminent scientists from history including Isaac Newton (1672),[2] Charles Darwin (1839),[2] Michael Faraday (1824),[2] Ernest Rutherford (1903),[3] Srinivasa Ramanujan (1919), Albert Einstein (1921),[4] Dorothy Hodgkin (1947),[5] Alan Turing (1951)[6] and Francis Crick (1959).[7] More recently, fellowship has been awarded to Stephen Hawking (1974), Tim Hunt (1991), Elizabeth Blackburn (1992), Tim Berners-Lee (2001), Venkatraman Ramakrishnan (2003), Andre Geim (2007), James Dyson (2015) and around 8000 others in total, including over 280 Nobel Laureates since 1663. As of 2016, there are around 1600 living Fellows, Foreign and Honorary Members.

The Society of Antiquaries of Scotland is the senior antiquarian body of Scotland, with its headquarters in the National Museum of Scotland, Chambers Street, Edinburgh. The Society's aim is to promote the cultural heritage of Scotland.

The Royal Society for the Encouragement of Arts, Manufactures and Commerce (RSA) is a London-based, British organization committed to finding practical solutions to social challenges.[1] Founded in 1754 as the Society for the Encouragement of Arts, Manufacture, and Commerce, it was granted a Royal Charter in 1847,[2] and the right to use the term Royal in its name by King Edward VII in 1908.[3] The shorter version, The Royal Society of Arts and the related RSA acronym, are used more frequently than the full name.

Robert is buried in the south aisle of Westminster Abbey. "His obituary appeared in the March 1792 edition of The Gentleman's Magazine: It is somewhat remarkable that the Arts should be deprived at the same time of two of their greatest ornaments, Sir Joshua Reynolds and Mr. Adam: and it is difficult to say which of them excelled most in his particular profession... Mr. Adam produced a total change in the architecture of this country: and his fertile genius in elegant ornament was not confined to the decoration of buildings, but has been diffused to every branch of manufacture. His talents extend beyond the lie of his own profession: he displayed in his numerous drawings in landscape a luxuriance of composition, and an effect of light and shadow, which have scarcely been equaled...to the last period of his life, Mr. Adam displayed an increasing vigor of genius and refinement of taste: for in the space of one year preceding his death, he designed eight great public works, besides twenty-five private buildings, so various in their style, and so beautiful in their composition, that they have been allowed by the best judges, sufficient of themselves, to establish his fame unrivaled as an artist. He left nearly 9,000 drawings, 8,856 of which (by both Robert and James Adam) were subsequently purchased in 1833 for £200 by the architect John Soane and are now at the

"He left nearly 9,000 drawings, 8,856 of which (by both Robert and James Adam) were subsequently purchased in 1833 for £200 by the architect John Soane and are now at the Soane Museum in London." 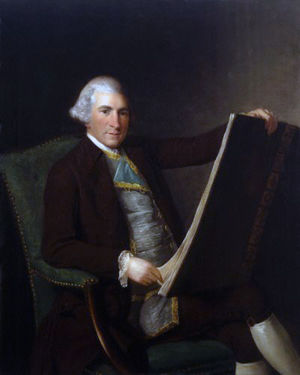 Leave a message for others who see this profile.
There are no comments yet.
Login to post a comment.
[Living Snyder]
A Book done on Robert's designs

Robert is 23 degrees from Ludwig Kraayenbrink, 9 degrees from Henry VIII of England and 25 degrees from Ferdinand von Zeppelin on our single family tree. Login to find your connection.