John Adams in his own words:

President John Adams was a Founding Father in the American Revolution

From the pen of John Adams, statesman, diplomat, member of the Continental Congress, signer of the Declaration of Independence, Vice-President under Washington, and Second President of the United States.... [1]

"Suppose a nation in some distant Region should take the Bible for their only law Book, and every member should regulate his conduct by the precepts there exhibited! Every member would be obliged in conscience, to temperance, frugality, and industry; to justice, kindness, and charity towards his fellow men; and to piety, love, and reverence toward Almighty God ... What a Eutopia, what a Paradise would this region be."

"Now I will avow, that I then believe, and now believe, that those general Principles of Christianity, are as eternal and immutable, as the Existence and Attributes of God; and that those Principles of Liberty, are as unalterable as human Nature and our terrestrial, mundane System."

"The second day of July, 1776, will be the most memorable epoch in the history of America. I am apt to believe that it will be celebrated by succeeding generations as the great anniversary Festival. It ought to be commemorated, as the Day of Deliverance, by solemn acts of devotion to God Almighty. It ought to be solemnized with pomp and parade, with shows, games, sports, guns, bells, bonfires and illuminations, from one end of this continent to the other, from this time forward forever."

They had five children in ten years, and one more, a stillborn daughter, in 1777. Their first son, John Quincy Adams, would become the sixth president of the United States.[5] [4][7]

Adams' great-great grandfather, Henry Adams, emigrated circa 1636 from Braintree, England to the Massachusetts Bay Colony. Henry's 89 grandchildren earned him the modern nickname of "Founder of New England." In terms of contemporaries, John Adams was second cousin to the statesman and colonial leader Samuel Adams. [3]

Adams was highly conscious of his heritage. He considered his Puritan ancestors "bearers of freedom." He also inherited a seal with the Boylston arms on it from his mother. This he loved and used frequently until his presidency, when he thought that the use of heraldry might remind the American public of monarchies.

As a young man, Adams attended Harvard College. His father expected him to become a minister. Instead, Adams graduated in 1755, taught for three years, and then began to study law under James Putnam. He had a talent for interpreting law and for recording observations of the court in action.

He became prominently involved in politics in 1765 as an opponent of the Stamp Act. In 1770, he won election to legislative office in the Massachusetts General Court. He later served as a Massachusetts representative to the First (1774) and the Second (1775-1778) Continental Congresses, as ambassador to Great Britain (1785-1788) and to the Netherlands (1782-1788), and as Vice President under George Washington from 1789 to 1797.

Adams found the role of Vice President to be frustrating. He wrote to wife Abigail that, "My country has in its wisdom contrived for me the most insignificant office that ever the invention of man contrived or his imagination conceived." After George Washington stepped down, Americans narrowly elected John Adams, a Federalist, President over his Democratic-Republican opponent, Thomas Jefferson. Jefferson became Adams's Vice President. In 1800, Jefferson finally won the presidential vote, and Adams retired to private life in 1801 when his term of office expired....

President John Adams retired to his farm in Quincy, Massachusetts. Here he penned his elaborate letters to Thomas Jefferson. Here on 04 July 1826, he whispered his last words: “Thomas Jefferson survives.” But Jefferson had died at Monticello a few hours earlier.[8]

In 1820, he voted as elector of president and vice president; and, in the same year, at the advanced age of 85, he was a member of the convention of Massachusetts, assembled to revise the constitution of that commonwealth. Mr. Adams retained the faculties of his mind, in remarkable perfection, to the end of his long life. His unabated love of reading and contemplation, added to an interesting circle of friendship and affection, were sources of felicity in declining years, which seldom fall to lot of any one.[9]

On 04 July 1826, the fiftieth anniversary of the adoption of the Declaration of Independence, Adams died at his home in Quincy, Massachusetts. Told that it was the Fourth, he answered clearly, "It is a great day. It is a good day." His last words have been reported as "Thomas Jefferson survives". His death left Charles Carroll of Carrollton as the last surviving signatory of the Declaration of Independence. John Adams died while his son John Quincy Adams was president.[10]

"He saw around him that prosperity and general happiness, which had been the object of his public cares and labours. No man ever beheld more clearly, and for a longer time, the great and beneficial effects of the services rendered by himself to his country. That liberty, which he so early defended, that independence, of which he was so able an advocate and supporter, he saw, we trust, firmly and securely established. The population of the country thickened around him faster, and extended wider, than his own sanguine predictions had anticipated; and the wealth, respectability, and power of the nation, sprang up to a magnitude, which it is quite impossible he could have expected to witness, in his day. He lived, also, to behold those principles of civil freedom, which had been developed, established, and practically applied in America, attract attention, command respect, and awaken imitation, in other regions of the globe; and well might, and well did he exclaim, 'where will the consequences of the American revolution end!' "If any thing yet remains to fill this cup of happiness, let it be added, that he lived to see a great and intelligent people bestow the highest honor in their gift, where he had bestowed his own kindest parental affections, and lodged his fondest hopes. "At length the day approached when this eminent patriot was to be summoned to another world; and, as if to render that day forever memorable in the annals of American history, it was the day on which the illustrious Jefferson was himself, also to terminate his distinguished earthly career. That day was the fiftieth anniversary of the Declaration of Independence. "Until within a few days previous, Mr. Adams had exhibited no indications of rapid decline. The morning of the fourth of July, 1826, he was unable to rise from his bed. Neither to himself, or his friends, however, was his dissolution supposed to be so near. He was asked to suggest a toast, appropriate to the celebration of the day. His mind seemed to glance back to the hour in which, fifty years before, he had voted for the Declaration of Independence, and with the spirit with which he then raised his hand, he now exclaimed, 'Independence forever.' At four o'clock in the afternoon he expired. Mr. Jefferson had departed a few hours before him." -- Daniel Webster in section "Retirement and Death". p9, John Vinci, "Biography of John Adams,"

"They, (Mr. Adams and Mr. Jefferson,) departed cheered by the benediction of their country, to whom they left the inheritance of their fame, and the memory of their bright example. If we turn our thoughts to the condition of their country, in the contrast of the first and last day of that half century, how resplendent and sublime is the transition from gloom to glory! Then, glancing through the same lapse of time, in the condition of the individuals, we see the first day marked with fulness (sic) of vigor of youth, in the pledge of their lives, their fortunes and their sacred honor, to the cause of freedom and of mankind. And on the last, extended on the bed of death, with but sense and sensibility left to breathe a last aspiration to heaven of blessing upon their country; may we not humbly hope, that to them, too, it was a pledge of transition from gloom to glory; and that while their mortal vestments were sinking into the clod of the valley, their emancipated spirits were ascending to the bosom of their God!" -- son John Quincy Adams.[9]

His crypt lies at United First Parish Church (also known as the Church of the Presidents) in Quincy, Massachusetts. Originally, he was buried in Hancock Cemetery, across the road from the Church. [11][12] 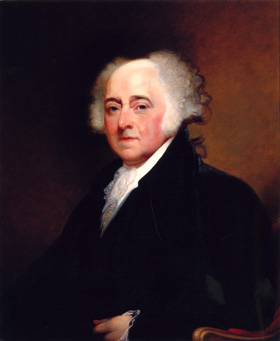 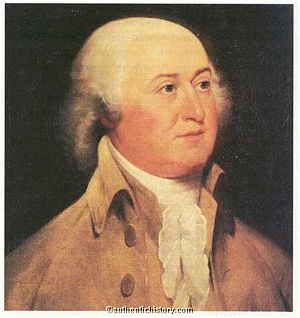 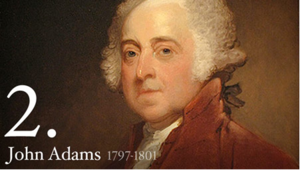 Leave a message for others who see this profile.
There are no comments yet.
Login to post a comment.
Albert Finch MD
Adams-36515 and Adams-10 appear to represent the same person because: Adams-10 is the same petson but with much more complete information.
posted Jul 19, 2018 by Albert Finch MD

Anne B
Birth and marriage dates in the data have no corresponding statement and citation in the biography.
posted Mar 29, 2018 by Anne B

Lisa (Kelsey) Murphy
that he was John and not Samuel Adams. In 1783 there was talk of him becoming Ambassador to the British Court and Abigail begged him to say no to the appointment. She missed him and had many years not being with him. She was 39 and felt old as her health was starting to become an issue. She was terrified to travel across the sea, he plead in September of that year to come to him. She found out he was commisioned to the position and had started having health issues himself so she gave in and decided to go to him. On June 18, 1784 she said goodbyes at her home and on the 20th, her ship sailed with her, Nabby and their 2 servants. July 20, 1784 the ship hit British soil.

Lisa (Kelsey) Murphy
and the United States. He took John Quincy (his son) and a servant and they set off to France. Abigail did not go to see them off, they said what they needed to at their home. and many did not know of the appointment until after the ship left U.S. soil. The weather was horrible that morning in February of 1778. It turned out to be a pretty bad trip. April 4th they had landed and gone about 50 miles. The 5th brought another 100 miles and on the 6th of April he wrote how he loved the beauty all around him. The only draw back he saw was the large amount of beggars swarming everywhere. They finally arrived in Paris on the 8th of April 1778. Some citizens were disappointed...
posted Feb 26, 2018 by Lisa (Kelsey) Murphy

Lisa (Kelsey) Murphy
In November 1777 he had gotten to be home and spent a couple weeks with his family. He felt that he was letting his family down. He was not taking interest in his children's education as much as he wanted and they were starting to run shorter on money. He planned to just stay home and tend to his family. However, this did not end up happening. Elbridge Gerry informed him that he was to take over for Silas Deane as Commissioner to France. Silas had been accused of questionable conduct and being tried for it. November 27th he was named a Commisioner to work iwth Franklin and Arthur Lee in France. They wanted to negotiate an alliance between France...
posted Feb 26, 2018 by Lisa (Kelsey) Murphy

John is 17 degrees from Donald Howard, 11 degrees from Julia Howe and 13 degrees from Henry VIII of England on our single family tree. Login to find your connection.