Son of Sabra (Saborah) Whitmore and Job Sr. Adams. He was the youngest of three sons born to them

Elias Adams, grandfather of Captain Adams, was born at Marlboro, Vermont, February 18, 1792. The record of his ancestry runs back to England, Wales, the Norman countries of Northern France to a mediaeval ancestry which included Charlemagne and Charles Martel. Robert Adams, who was born in Devonshire, England, in 1602, settled at Ipswich on Massachusetts Bay in 1635. His son Jacob Adams was an early and influential settler of Suffield, Connecticut. Lieut. Joel Adams, grandson of Jacob, was a soldier in the French war and was the pioneer of the family at Marlboro, Vermont. He was the father of Job Adams and grandfather of Elias.

Moved to Nauvoo in 1843 from Quincy Ill. Orange Co. Changed to Washington Co. in about 1820. As a boy he made his home with his aunt Elizabeth Adams Otis because his mother died. Husband, Arunah Otis was a veteran of the Revolutionary War. Elias served in the War of 1812, fought in several battles. He the British and also Indians. He was wounded three times. He remained in the Army until 1817 when he was honorably discharged at New Madrid, Missouri. After getting out of the Army him and a friend bought Oxen and Cart and traveled to Illinois. . He manufactured brick and had a flour mill. Believe he joined the LDS church in 1843 when he moved to Nauvoo. He met Joseph Smith in Nauvoo. Elias and family journeyed with the advanced companies of Saints in 1846 With ox team and wagon and was appointed Presiding Elder of the Church at Mt Pisgah in Iowa 172 miles west of Nauvoo. He remained there until 1850 to supply the Saints moving west. Work on the Nauvoo temple in Illinois.

Removed that he founded Quincy,,, he did not. Added the following- Judy Bjurstrom After the British failed to regain their former colonies in the War of 1812, the American government granted military tracts to veterans as a means to help populate the West. Peter Flinn, having acquired the land from veteran Mark McGowan for his military service in 1819, ended up selling 160 acres (0.65 km2) of land acquisitions to Moravia, New York native John Wood for . John Wood later founded Quincy, which at the time was coined Bluffs, Illinois.[6]

In 1825, Bluffs renamed their community Quincy and became the seat of government for Adams County, both named after newly elected President John Quincy Adams. Quincy incorporated as a city in 1840.

He served fiveyears in war of 1812 and the Indian wars

Is Elias your ancestor? Please don't go away!

ask our community of genealogists a question.
Sponsored Search by Ancestry.com
DNA Connections
It may be possible to confirm family relationships with Elias by comparing test results with other carriers of his Y-chromosome or his mother's mitochondrial DNA. However, there are no known yDNA or mtDNA test-takers in his direct paternal or maternal line. It is likely that these autosomal DNA test-takers will share some percentage of DNA with Elias: 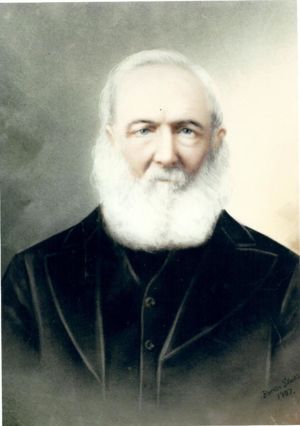 Jennifer Tillman
Hi, Could you please add the names of the deceased people you have marked as "private" so everyone in the community will know who the profile is for? Thanks, Jenn
posted Apr 15, 2015 by Jennifer Tillman