"Although he was disciplined for taking part in a student rebellion, he received his degree (from Harvard) in August 1821. He then studied law with his father, and in October 1823 he entered his third year of legal education in Daniel Webster’s Boston law office. The following October, after being admitted to the Suffolk County Bar, George began to practice law in Boston. He was elected to the Massachusetts house of representatives in 1826, serving for one year, and in 1828 he won election to the Boston Common Council for Ward 7.

George fell into alcoholism and ill health, and his dissipation was a matter of grave concern to his family. Early in April 1829, a child he had fathered was born to Eliza Dolph, a chambermaid in the home of Dr. Thomas Welsh. On 30 April, while traveling to Washington to assist his parents in their move to Quincy after John Quincy’s defeat for reelection to the presidency, George drowned after either falling or jumping from the steamboat Benjamin Franklin in Long Island Sound."[3][1]

For a full history on this life of GWA, please see Massachusetts Historical Society

ask our community of genealogists a question.
Sponsored Search by Ancestry.com
DNA Connections
It may be possible to confirm family relationships with George by comparing test results with other carriers of his ancestors' Y-chromosome or mitochondrial DNA. Y-chromosome DNA test-takers in his direct paternal line on WikiTree: 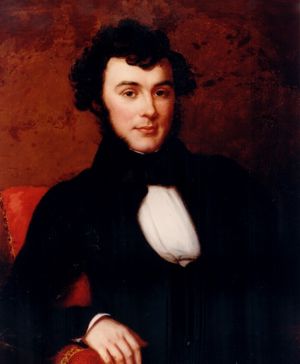 Maggie N.
This profile should be OPEN according to the honor code at WikiTree .Thanks.

If you would like a US President's Badge on your profile for helping us work in this project,please let me know , and THANKS for all you do !