Peter Charadon Brooks Adams (June 24, 1848-February 14,1927) was a lawyer, historian, and writer, who served as an informal adviser to President Theodore Roosevelt. Although reared Unitarian, he was agnostic for many years. Late in life he returned to the Unitarian fold at the family church in Quincy, Massachusetts. Named for his grandfather Peter Charadon Brooks, he was called Brooks at his grandfather's suggestion.

He was the youngest son of Abigail Brooks Adams and Charles Francis Adams, Sr. His mother was the youngest daughter of wealthy Unitarian Peter Charadon Brooks and Anna Gorham Brooks. President John Quincy Adams (1767-1848) was his grandfather and President John Adams (1735-1826) a great grandfather. His father, a diplomat, legislator, and writer was nominated for Vice President on the Free Soil ticket the year Brooks was born.

Brooks Adams was baptized by Nathaniel Frothingham, the Unitarian minister at First Church of Boston, Massachusetts. His mother and father, conscientious parents, took him to the new Sunday school at First Church where his father sometimes taught. Later his father was the Sunday school superintendent at their summer church in Quincy, Massachusetts. His parents worried about Brooks during his childhood; he seemed too active, was often inattentive, and sometimes made scenes in public. He collected stamps with a single-minded zeal that often interrupted family life, and he had reading and spelling problems that made his mother despair. In spite of these difficulties, his parents took young Brooks to places like the Smithsonian. He attended Columbia College in New York City, as did his sister Mary.

The principal archival repository for the Adams family is the Massachusetts Historical Society in Boston, Massachusetts. The papers of Brooks Adams are also available in the microfilm edition of the Henry Adams letters. Additional material can be found in the Harvard University Archives, Boston University Archives, Library of Congress, New York Public Library, and at the Old House, Quincy, Massachusetts. The best biographies of Brooks Adams are in journal form; Wilhelmina S. Harris, “The Brooks Adams I Knew” Yale Review, (1969) and Marc Friedlander, “Brooks Adams en Famille,” Proceedings of the Massachusetts Historical Society, (1968). Older biographies in book form that are useful include; Anderson Thornton, Brooks Adams: Constructive Conservative (1951); Arthur F. Beringause, Brooks Adams: A Biography (1955); and Timothy P. Donovan, Henry and Brooks Adams: The Education of Two American Historians (1961). For Brooks relationship with other family members see Francis Russell, Adams, an American Dynasty (1976).

Is Brooks your ancestor? Please don't go away!

ask our community of genealogists a question.
Sponsored Search by Ancestry.com
DNA Connections
It may be possible to confirm family relationships with Brooks by comparing test results with other carriers of his ancestors' Y-chromosome or mitochondrial DNA. Y-chromosome DNA test-takers in his direct paternal line on WikiTree: 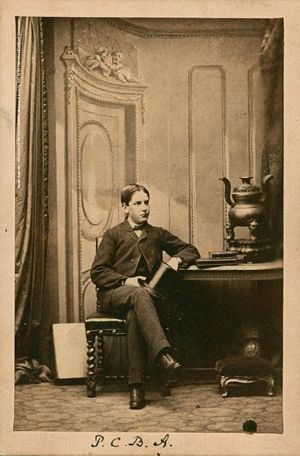