John and Susanna had three children:

Adams died in 1761, at the age of 70, and his widow Susanna later married John Hall

Please see the biography at Wikipedia 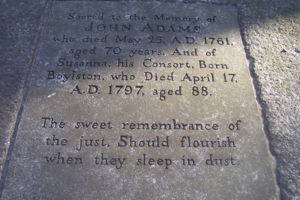 Anne B
Adams-36900 and Adams-35 appear to represent the same person because: No point in leaving -36900 without anything other than the birth.
posted May 13, 2020 by Anne B
M Cole
attached daughter Jerusha, born/died in North Carolina doesn't seem to belong in this family. I suggest that she be disconnected.
posted Apr 06, 2020 by M Cole

Robin Lee
Adams-36514 and Adams-35 appear to represent the same person because: Clearly intended to be the same person
posted Jul 19, 2018 by Robin Lee

Andrea (Stawski) Pack
Find A Grave Memorial# 3068 He was a Deacon Burial:

Hancock Cemetery, Quincy, Norfolk County, Massachusetts, USA Photo: Has a photo of his gravestone on gravesite