Henry Adams II was born in 1609 in England, emigrated to Massachusetts with his father Henry. mother, and six siblings on the ship Mary & John in 1638 [1], settled first in Braintree, and then removed to Medfield to help found that town in 1651.

He was the first town clerk of Braintree, Massachusetts, and later also of Medfield, Massachusetts. He was Representative of the latter town in the General Court for 1659, 1665,1674, and 1675.

He was Lieutenant of the Medfield military company, which fought against the Indians in 1675-76. He was killed by Indians waiting in ambush in his doorway, as he responded; to the alarm for their raid on Medfield on Feb. 21, 1675/6 [2], the second year of the war. His wife was accidentally shot the same day, at Rev. Mr. Wilson's house, and died 29th of Feb. She was confined to the house by sickness, and was in a bed in the chamber, when the gun in the hands of Capt. John Jacob of Hingham, who had charge of a company of about 80 men stationed at Medfield, was accidentally discharged in the room below her, the ball passing through her bed."

Henry was also considered to have been a resident of neighboring Sherborn, where he owned property. His is the first name recorded on Sherborn's monument to its sons who died in war. See image at right.

He married Elizabeth Paine on October 17, 1643 in Braintree, Norfolk County, Massachusetts. He was the father of at least eight children in New England, first three in Braintree, [3] the last five in Medfield. [4]: 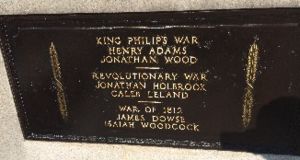 According to his death record Henry died on February 21, 1675. I add a photo copy of his record

Halsey Bullen
I added some primary sources and rearranged part of the biography in this profile of my 8th great-grandfather, and added a research note that raises issues about three relationships in the profile for which I found no primary source: the first wife recorded in the profile, first child named Elizabeth, and a second son with the name John.
posted Jul 30, 2017 by Halsey Bullen