American cartoonist known for his darkly humorous and macabre characters.

Cartoonist, Charles Samuel Addams was born an only child on January 7, 1912 in Westfield, New Jersey[1], to Grace M. Spear and Charles Huy Addams,[2][3][4] a piano-company executive who had studied to be an architect. He was known as “something of a rascal around the neighborhood” as childhood friends recalled. Addams was distantly related to U.S. presidents John Adams and John Quincy Adams, despite the different spellings of their last names, and was a first cousin twice removed to noted social reformer Jane Addams. He attended Westfield High School, where he was the art editor for the ‘Weather Vane'. He attended Colgate University, the University of Pennsylvania, and the Grand Central School of Art in New York City briefly, but refused to graduate from any of them. Making his first appearance in ‘The New Yorker' magazine in February, 1932, by 1940 he was offered a full-time position at the magazine at an initial thirty-five dollars per cartoon.

In 1937 the first so-called Addams Family cartoon appeared. His recurring and as yet nameless characters were appreciated by television producer David Levy and Addams was approached about using his characters in a television show. Addams agreed and finally named the characters.

On September 18, 1964 the television show The Addams Family premiered, and he received $1000 a week for the use of his characters. The show would run for only two years but it spawned two cartoon series, and two successful motion pictures.

Charles died on September 28, 1988 outside his home.[1] As a lover of cars, Charles went out and sat in his car. After a long cruise, Charles, put his head down on the steering wheel. As his heart gave in, Charles Addams, passed on to the other side. He is interred in Sagaponack, New York on Charles Addams Estate Grounds.[5]

He wanted to be remembered as a fun loving artist, and had requested a party instead of a wake. At the New York Public Library, a party was thrown, complete with a banquet and Jazz bands. In a Boston Newspaper, a cartoon was depicted in which the cartoon family looked sadly down at a grave, while Charles crawled out from the other side.

Charles died the same way he came in...with a style all his own.

A cartoon ran after his death depicting his Addams Family standing vigil before his grave while Addams crawled out the other side. A Charles Addams Art Scholarship was founded in 1991. The main branch of the New York Public Library has a Charles Addams Gallery on the third floor. His thirteenth collection of cartoons 'The Addams Family Album' was published posthumously in 1991. 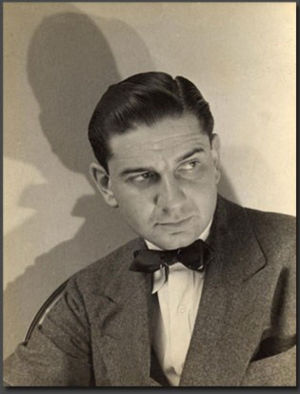 Charles and his 2nd wife, Barbara 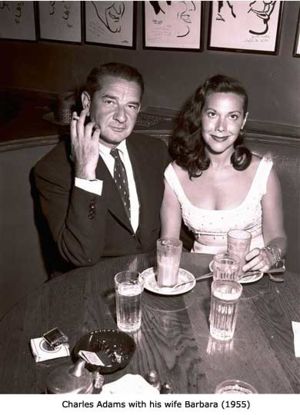 Charles with characters from The Addams Family TV series 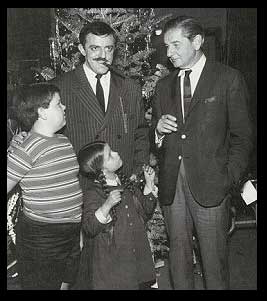 Charles is 20 degrees from Donald Howard, 14 degrees from Julia Howe and 18 degrees from Henry VIII of England on our single family tree. Login to find your connection.