He was an American philosopher, educator, and popular author. As a philosopher he worked within the Aristotelian and Thomistic traditions. He taught at Columbia University and the University of Chicago, served as chairman of the The Encyclopædia Britannica Board of Editors, and founded his own Institute for Philosophical Research. He was also editor of the Great Books Program. Adler long strove to bring philosophy to the masses, and some of his works (such as How to Read a Book) became popular bestsellers.

Mortimer was born in 1902 in Manhattan, New York. He was the son of nonobservant Jewish parents, Ignacia, a jewelry salesman and Clarissa (Manheim) Adler, a school teacher.

Mortimer dropped out of school at age 14 to become a copy boy for the New York Sun, with the ultimate aspiration of becoming a journalist. He soon returned to school to take writing classes at night where he discovered the western philosophical tradition. After his early schooling and work, he went on to study at Columbia University. Although he refused to take the required swimming test for a bachelor's degree (a matter that was rectified when Columbia gave him an honorary degree in 1983), he stayed at the university and eventually received an instructorship and finally a doctorate in psychology. While at Columbia University, Adler wrote his first book, Dialectic, published in 1927.

Mortimer married Helen Boynton in 1927, and had two children, Mark and Michael. They divorced in 1960.

He married second, Carolyn Pring, in 1963. They had two children, Douglas and Philip.

In 1930, he was hired at Chicago's law school as a professor of the philosophy of law. He was the first "non-lawyer" to join the law school faculty. Adler also taught philosophy to business executives at the Aspen Institute.

Adler and his colleague, Richard Hutchins, founding the Great Books of the Western World program and the Great Books Foundation. He founded and served as director of the Institute for Philosophical Research in 1952, and also served on the Board of Editors of Encyclopædia Britannica, succeeding Hutchins as its chairman in 1974. With Max Weismann, he founded the Center for the Study of The Great Ideas in 1990 in Chicago.

While doing newspaper work and taking night classes during his adolescence, Adler had encountered works of men he would come to call heroes, including Plato, Aristotle, Thomas Aquinas, John Locke, and John Stuart Mill, among others.

Is Mortimer your ancestor? Please don't go away!

ask our community of genealogists a question.
Sponsored Search by Ancestry.com
DNA
No known carriers of Mortimer's DNA have taken a DNA test. 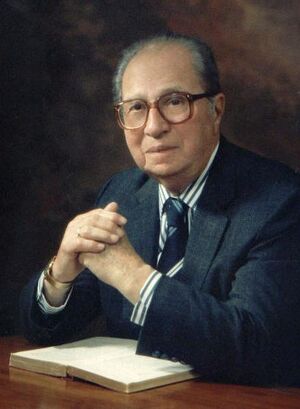