Flavius Aetius
Born about 0391 in Durostorum

"The father of Aetius was Gaudentius, an illustrious citizen of the province of Scythia, and master-general of the cavalry; his mother was a rich and noble Italian. From his earliest youth, Aetius, as a soldier and a hostage, had conversed with the Barbarians."[1]

"Three days after the death of John, Aetius came with 60,000 Huns to his support. A battle took place between the new comers and the forces of Valentinian under the command of Aspar, in which many were slain on both sides. An agreement followed ; Aetius entered the service of Placidia and Valentinian with the rank of count."[2]

"So then the struggle began for the advantage of position we have mentioned. Attila sent his men to take the summit of the mountain, but was outstripped by Thorismud [crown prince of the Visigoths] and Aetius, who in their effort to gain the top of the hill reached higher ground, and through this advantage easily routed the Huns as they came up. When Attila saw his army was thrown into confusion by the event he [urged them on with a fiery harangue and . . .] inflamed by his words they all dashed into the battle."[3]

"It is clear enough that some of the characters of the common cycles are historical persons. Thus there can be no doubt that Aetla (Atli, Etzel), king of the Huns, is the famous Hunnish king Attila who died in 453. Again the Burgundian king Guthhere (Gunnarr, Gunther), who plays so prominent a part in the stories of Waldhere and Sigurðr-Siegfried, is clearly identical with the historical Burgundian king Gundicarius (Gundaharius), whose defeat in 435 by the Roman general Aetius is recorded by contemporary writers." [4]

"The embassy consisted of Count Romulus; of Promotus, president of Noricum; and of Romanus, the military duke. They were accompanied by Tatullus, an illustrious citizen of Petovio, in the same province, and father of Orestes, who had married the daughter of Count Romulus. [5] Cassiodorus (Variar. i. 4) mentions another embassy, which was executed by his father and Carpilio, the son of Aetius; and, as Attila was no more, he could safely boast of their manly, intrepid behavior in his presence."[6]

Is Flavius your ancestor? Please don't go away!

ask our community of genealogists a question.
Sponsored Search by Ancestry.com
DNA
No known carriers of Flavius's ancestors' DNA have taken a DNA test. 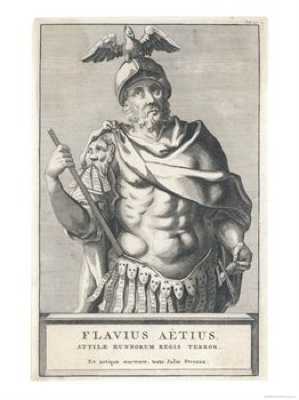 Categories: Battle of the Catalaunian Plains