Thomas was born in Manchester, England, on 28 Jan 1812 (recorded on at his death). His parents were Jonas Ainsworth and Susan (source New South Wales BDM).

He is reported as having arrived in Australia as a convict in 1831 although the Convict records do not support this arrival date. There was a Thomas Ainsworth onboard the Camden in 1833, provided Certificate of Freedom in 1844 and Royal Pardon in 1847 which may be the same.

He is suggested to have married Helen Laverty (Lavarty) and had three children. The family arrived in the Richmond river area of New South Wales in 1847 which coincides with the Pardon mentioned above. Her name though was Ellen Lavarty and she was a "native of Armagh", Northern Ireland. She is noted below in connection with his estate. The marriage is recorded at Christ Church in Newcastle, New South Wales, Australia, on 14 Apr 1841.[1]

He became a shipwright and owned the "Matilda Ann" which he used for supplies from Sydney to Ballina and cedar and tallow on return.

Around 1853 he built, and his wife managed, the "Sailor's Home" hotel in East Ballina. It was from here that the New South Wales Police mounted their operations against the regional Aboriginal tribes.

He built and owned a house at North Creek, Ballina before the selection and he drowned there in 1864, aged 53. He was buried at the East Ballina cemetery now the Ballina Pioneer Cemetery.

James and Jane may have been twins. They were both Christened on the same day. Although the Ballina & Richmond River GenWeb suggests different birth dates the christening records for James[6] and Jane[7] are the same; on 29 Dec 1845.

The son, James Ainsworth, was one of the first "selectors" of North Creek. He became a sugar cane farmer and became involved, successfully, in the timber business. He became a wealthy businessman and later retired to Ballina where he served as an Alderman on the Ballina Council. He and Christina had 7 sons & 4 daughters amongst them Henry, James, Charles, William, George, Roy, Myrtle and Florence. Lake Ainsworth, the famous tea tree lake with great cleansing powers, at Lennox Head, is named after this family.

An Ellen Ainsworth, the wife of Thomas, was mentioned as the executor of Thomas' will.[8] "Estate of Thomas Ainsworth, of Ballina, Deceased. I REQUEST THAT ALL DEBTS due by the deceased, may be sent to me, at East Ballina, immediately, FOR SETTLEMENT; and that all DEBTS DUE TO THE ESTATE, may be PAID to me as his administratrix, without delay; and I caution all parties against dealing in matters connected with the estate without my written authority. ELLEN AINSWORTH, Administratrix."

It seems that Ellen remarried after the death of Thomas as an Ellen Ainsworth, of Richmond River, married Charles Brown (a native of Stockholm, Sweden) on 7th August 1865.[9] This Ellen Ainsworth is stated to be a "native of Armagh". 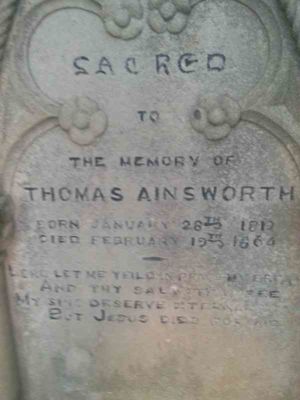