William Albright served in the Confederate Army during the Civil War as a Pvt, Co G, 8th Virginia Cavalry. He enlisted in May 1862 and was mustered out in Feb 1865. Company G was known as the Mountain Rangers with many of the men from several counties of present-day West Virginia, including Monroe County and Putnam County. Among the battles in which he fought were Winchester, Lacy Landing, and Harrisonburg. [2] [3]

Court records Lawrence County, Kentucky show William Albright was involved in a nasty lawsuit to maintain possession of his farm. The allegations (intended to show he was out of his mind) were never proven and there were sworn affidavits that the accusations were not credited. [4] There was also a Grand Jury Indictment, Commonwealth vs Wm A. Albright. A number of prominent members of the community guaranteed his bail, court appearance and made depositions about his good character. On 10 April 1895 the case was filed away.[5]

In the mid 1890's William Albright made several purchases of land on Cat's Fork in Lawrence County, Kentucky. It is not known if this was where he died or if he returned to Lincoln County, West Virginia. Neither William nor his wife were in the 1900 census. [6]

There was another William Albright in Virginia born c. 1798 in Bedford Co. the son of Caspar Albright who died 1803 in Franklin County, Virginia.

The man in this profile, William Albright, was born in 1817, so it would be unlikely he was the same man who bought land in 1828 from Jonathan McGuire in Franklin Co. since William Albright was only 11 years old at that time. It's possible Moses Albright was somehow related to William Albright but we don't think Albright-893 and Albright-1324 were the same man. While we do not know if the men were related here is some data that might be useful as research progresses on the Albright family.

Two deeds for William Albright (with a wife Sarah) to and from Jonathan McGuire recorded in Franklin County, Virginia


Memories: 1
Enter a personal reminiscence or story.
Connie (Daniels) Graves
Hardesty's Encyclopedia (1884), p 398,399 Personal History Dept, Lincoln Co., WV. Sheridan District, WILLIAM A. ALBRIGHT--owns 179 acres of good land on Trace fork of Four-mile creek, and has made his home in this district since 1868. He was born in Wythe County, Virginia, January 19, 1817, a son of Moses and Elizabeth (Camper) Albright, now many years deceased. In Boone county, (then) Virginia in 1837, he was united in marriage with Frances Adkins, and the birth and death record of their children is: Moses A., born January 7, 1838, died 1863; Elias E., born September 20, 1840, lives in Cabell County; Cynthia J., February 12, 1841, lives near home; Isaac M., May 17, 1843, died September 15, 1853; Silas R., born May 27, 1845; Matthew A., August 10, 1847, lives in Boyd County, Kentucky; William C., February 5, 1849; George W., February 3, 1851; James P., June 10, 1853; Joseph S., May 31, 1855, died September 13, 1856. The wife of Mr. Albright was a daughter of Rev. William and Elizabeth (Meadows) Adkins, she was born in Monroe county. Mr. Albright, his wife, and all their children save one, are members of the Church of Christ. One son belongs to the Missionary Baptist Church. During the war between the States Mr. Albright was a member of the 8th Virginia Cavalry, Company G, Confederate service, and among the battles in which he fought were Winchester, Lacy Landing, and Harrisonburg. He has served his district as overseer of the poor, and as deputy sheriff and constable. His postoffice address is Bowen, Wayne county, Virginia.
posted 1 May 2016 by Connie (Daniels) Graves   [thank Connie]
Login to add a memory.
Is William your ancestor? Please don't go away! 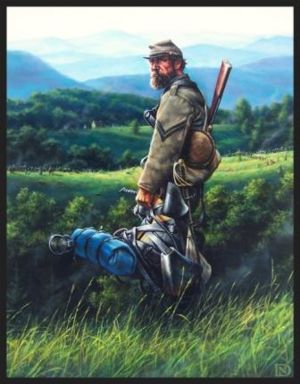