Thomas Alcock
Born before 1614 in England

While we know that George Alcock, Thomas Alcock and Elizabeth (Alcock) Whitehead were siblings, there is no proof of who their parents are.

John Alcock and Alice Alrich have been disconnected as parents of the three Alcock siblings. Thomas's birth place is sometimes reported as Riding, Northumberland, without evidence or source.

According to Robert Charles Anderson in The Great Migration Begins, the origins of Thomas Alcock are unknown.[1]

Judging from his dates of church admission (1630) and freemanship 1635), he was born no later than 1614. Although his parents are unknown, he had a brother of George Alcock of Roxbury and a sister Elizabeth Whitehead of Leamington Prioris, Warwickshire, whose sons were in New Haven.[1]

Most secondary sources assign two wives to Thomas Alcock: Mary, mother of the first two children, and Margery, the mother of the rest. But Mary is attested on only one record, the Dedham birth record for daughter Elizabeth. We are claiming, though, that this is the same as the Elizabeth baptized in Boston. The abbreviated form for Margery ("Margy") can be misread as Mary, and this may well be what has happened here. Our conclusion is that Thomas probably had only one wife, Margery.[1]

He was granted land in Dedham and was on the Dedham tax lists.[1]

"There is no deed or probate record which accounts for all the children of Thomas Alcock, and that there are three daughters unaccounted for beyond their births: Sarah, Hannah and Rebecca. They may well have married, and, given the residences of their mother and known siblings, they might be anywhere in Massachusetts or Connecticut."[1] 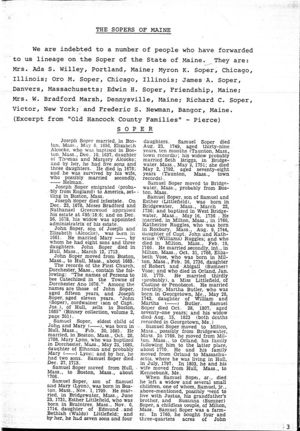 Cheryl (Aldrich) Skordahl
The following was sent through the pvt messaging system; but it really belongs here.

I am a 10th great-granddaughter of Thomas Alcocke and Margery through their son Philip who was born about 1646 and moved with his widowed mother Margery Alcock who married as her second husband widower John Benham of New Haven Colony.

I have used Thomas Alcocke to join the lineage society Daughters of Founders and Patriots as Thomas' 2nd great-grandson Daniel Alcox (variant on the original Alcocke) was a Lieutenant in the CT militia during the American Revolutionary War.

If the article cannot be found online, I will be glad to scan the copy I have and email to someone on the PGM team.

My lineage from Thomas Alcocke:

I also have a couple of pages of info regarding Thomas Alcocke's time at Dedham, MA from about 1643 to his return to Boston about 1652 where he was appointed the town 'cow keeper'. I hope he got paid well for that job.

The information about Dedham was compiled by the librarian at Dedham, MA's library.

Brad Stauf
Cheryl, it looks like Anne B. corresponded with this woman back in May of this year and read that article, based on comments on the profile of Thomas sister Katherine Alcock-419. Maybe Anne has an opinion on whether it's worth adding to this profile? I'm not sure how to tag multiple people on a comment like this, if it's possible.
posted Dec 29, 2020 by Brad Stauf

Anne B
I have the article (and access to NGSQ issues). Certainly the information on Thomas life in Dedham (not in the article), if sourced, would be a nice addition to the profile, if someone wants to add the information. I think most of the other information has been covered in the respective profiles already.
posted Feb 09, 2021 by Anne B

Cynthia (Billups) B
Alcocke-17 and Alcock-13 appear to represent the same person because: Same name (same father's name, although this is assumed), same birth date, same death place, and similar death dates (could be as a result of old-style dating). Please also note son, Philip, mentioned in bio of Alcock-13 with same birth date for him, too. We have here three matching generations. No doubts.

Anne B
A second (better) option would be to rename John as Unknown Alcock. We need a place holder to stick the siblings together.
posted May 19, 2017 by Anne B

Anne B
This is clearly a duplicate of Alcock-13. The father John is unsourced and is going to be disconnected for lack of proof. Objections?
posted May 19, 2017 by Anne B

Anne B
Parents John Alcock and Alice Alrich on this profile are going to be disconnected for lack of proof. Objections?
posted May 19, 2017 by Anne B

Starts about the middle of Page 18