Wife of Paul Antoine Richard — married 5 May 1911 in France

Mirra was born on 21 February 1878 in Paris, France to Jewish, materialistic and atheistic parents. Her father, Moïse Maurice Alfassa, was a banker from Adrianople, Turkey and her mother, Matilde Ismaloun, was from Alexandria, Egypt[1]. Her granddaughter, Prouprema states that Mirra's father was Moslem[2]. Savitri gives the birth and death dates for her parents as 5 July 1843 and 13 September 1918 respectively for Maurice Moise Alfassa, and 18 December 1857 and 9 December 1944 for Mathilde Ismalun, who was also from a banking family. Also given is that they were married in 1874 and that Blanche Rachel Mirra Alfassa was their third child and preceded by 2 sons (ref.2).

"From an early age Mirra was interested in spirituality and the occult, often spending hours in meditation. At age five, she began to experience spontaneously a kind of “inner light” as she described it, which to her was a guide for her growth in life, “though she did not know what it was”." (ref.1) She did a lot of reading, painting, drawing, singing and playing the piano, and was very keen on tennis, but did not go to school until aged 9 in 1887. This seems to be contradicted by a later statement of Mirra's that "I was a downright atheist. Up to the age of twenty,- the very idea of God made me furious", but all is made clear in Vol.3 of Sujata Nahar's 8 volume work titled Mother's chronicles[3].

She graduated from school in 1893 and went to the Académie Julian. She was introduced to an ex-graduate of the Art School, Henri Morisset, whom she married on 13 October 1897, and had a son, André, in the following year on 23 August 1898. [Savitri (ref.2) has that "They were going to the same Art School to study painting".] Henri and Mirra worked as artists for the next 10 years, but would separate in March 1908 and divorce (ref.2). During that time "Alfassa moved in avant-garde circles with her husband, associating with artists, musicians, and writers such as Pierre-Auguste Renoir, Henri Matisse, Auguste Rodin, César Franck[4], Anatole France[5], and Émile Zola" (ref.1). She continued to have inner 'experiences', with her 'inner light', and visions of one she thought to be Krishna. She was to say: “Between the age of eighteen [1896] and twenty [1898], I attained a conscious and constant union with the divine Presence and I had done it all alone, with absolutely nobody to help me, not even books" (ref.2).

She began a relationship with a French Reformed Church minister turned lawyer and aspiring politician, Paul Richard (1874–1967), which they formalised by marriage [on 5 May 1911 (ref.2)], to satisfy her mother [a different reason is given in the Wikipedia article on Mirra Alfassa], but she remained 'spiritual'. She met the Sufi teacher Inayat-Khan (1882–1927) of the Sufi Order, and ‘Abdu’l-Bahá (1844–1921)[6], the son of the founder of the Baha’i Faith, when they came through Paris (ref.1). Everything Paul Richard claimed to know and write about occultism came from Mirra, who 'sometimes described their relationship as “infernal” and “diabolical” ' (ref.2).

However, it was before her marriage, "in 1910 that I had this sort of reversal of consciousness ... – that is, the first contact with the higher Divine – and it completely changed my life" ... "for a while there remained an activity in the physical mind. But this was stilled two or three days after I saw Sri Aurobindo for the first time in 1914, and it never started up again. Silence settled" (Mother's Agenda, pdf version, p.102/3703).

When Mirra met Aurobindo in Pondicherry in 1914, she realised he was the one she had thought was Krishna in her earlier visions. In August of that year, "Aurobindo, Mirra Richard, and Paul Richard began a discussion group “The New Idea” and a monthly journal, Arya; the prospectus included four genres of writing (philosophy/theology, translations and commentaries, comparative religion, and methods in spiritual practice)" (ref.1). Six months later in 1915, the Richards returned to France due to WWI, where he was summoned as a Reservist but freed due to his medical condition. After staying in Marsillargues, where André joined them for the school holidays. They next moved to Japan to teach French to earn a living, while Aurobindo continued with the journal in Pondicherry. They left for Japan in March 1916, arriving on 18 May[7], and met with Rabindranath Tagore there in June 1916.

Mirra and Paul Richard returned to Pondicherry on 24 April 1920, however it became evident that Paul, who had twice failed to get elected to the office in the French Chamber of Deputies at Pondicherry, was 'disillusioned by Aurobindo', and was not happy with his marital relationship, so that he left Pondicherry in November 1920 (ref.2), spent a year travelling around North India, returned to France and remarried in England, without getting a divorce. However, a lawyer without even telling Mirra initially, acted on her behalf and a divorce was finally arranged. After working a few years as a professor in the United States, marrying 2 or 3 times more, he died in that country in 1967, leaving many children and grandchildren (ref.2).

Mirra and Dorothy Hodgson (aka Dutta), who had come from Japan with the Richards, were asked by Aurobindo to move into his house on 24 November 1920 after a great storm, which would become the Sri Aurobindo Ashram on 24 November 1926, where some other devotees were already residing. Aurobindo had attained the 4th plane of realisation or consciousness, where the 'Overmind' resided - "a plane of consciousness ... situated between human consciousness and the Supermind", or 'superconscious mind' Mukunda Lal (Ghosh) Paramahansa Yogananda's 'Autobiography of a Yogi' (1993, pp.70-1), or 'Over-Soul of Ralph Waldo Emerson.

He would then place Mirra in charge, calling her 'The Mother' in 1927, deeming her to be of equal yogic stature with their 'Integral Yoga'[8], while the increasing number of residents started to address him as Sri Aurobindo. They worked together as one in the role of spiritual teacher (guru) for the community.

The Mother oversaw the practical affairs of their community, which grew in many active ways. From about seventy members in 1928, it grew to 200 in 1937 and 400 by World War II, starting a school for children in 1943 (ref.1), which also engaged in 'Integral Yoga'.

In February 1949 she started a magazine called "The Bulletin", but the greatest change came in the following year on 5 December 1950, when Sri Aurobindo made his transition, and "Mirra decided to take up the entire work of the ashram and also to continue the integral yoga internally" (Wikipedia: Mirra Alfassa).

Following the return of French Pondicherry to India as a union territory in 1954, the Indian Prime Minister Jawaharlal Nehru Jawaharlal Nehru visited the Ashram on 16 January 1955 to allay his concerns, and returned on 29 September 1955 with his daughter Indira Ghandhi, who developed a close relationship with Mirra.

On 29 February 1956, The Mother experienced the manifestation of the “Supermind” on Earth, the goal of Sri Aurobindo’s Integral Yoga. Now celebrated as the Golden Day (ref.1). As an expression of that state of consciousness, she painted 472 oil paintings called Meditations on Savitri with her student Huta, during the period 1956 to 1972, with her experiences published in Notes on the Way, one of 17 volumes in the Collected Works of the Mother. There are more details on her experiences of the Supramental and the Light during 1956 in Mother's Agenda. Vol. 1.

By 1959, she had stopped most of her activities to devote herself towards yoga, and on 21 February 1963, on her 85th birthday, she gave her first darshan.

There does not seem to be a date when Sri Aurobindo had the substance of what became "The Dream"[9], but it was finally decided to build this city in 1964 . The Mother inaugurated Auroville[10]on 28 February 1968, at the age of 90. Meaning City of Dawn in French it was named after him, and designed to progress his belief that "man is a transitional being", which Mirra endorsed, stating "the purpose of Auroville is to realize human unity" (ref.1). The township was intended for 50,000 residents and had reached 2,814 at the beginning of 2018, slowly growing, having passed from the Sri Aurobindo Society to the Indian Government.

Her health began to decline in March 1973, and she made her transition on 17 November 1973, in her apartment in the ashram. She was buried in the samadhi (tomb of an enlightened guru) in a chamber just above Sri Aurobindo (ref.1). Her son André was with her to the end. In the following year, Kamala Reddy aka Mother Meera, aged 14, was taken by her uncle to the Sri Aurobindo Ashram in Pondicherry, where she visited the samadhi. Mr Reddy kept a record of what she said about her visit, when she called Mirra Alfassa by the name 'Sweet Mother', and described not only seeing their bodies in the tomb but also having an out-of-body experience with them after they woke up. Other experiences are also recorded with them (Adilakshmi, 2006, pp.10-12, 22, 28-38), up to 1978. Mirra's granddaughter Pournaprema[11] would also call her grandmother 'Douce Mére' (ref.2). The term 'Sweet Mother' is also used in a discussion section between her and residents at the Ashram in the period 1951 to 1957 'Notes and Fragments', as part of the introduction to her Mother's Agenda, and compiled by Satprem, including several of his letters.

The Government of India honoured Mirra Alfassa, by issuing a postage stamp on the 100th anniversary of her birth titled 'The Mother - Pondicherry, India' (Image 3).

Is Mirra your ancestor? Please don't go away!

ask our community of genealogists a question.
Sponsored Search by Ancestry.com
DNA
No known carriers of Mirra's DNA have taken a DNA test. 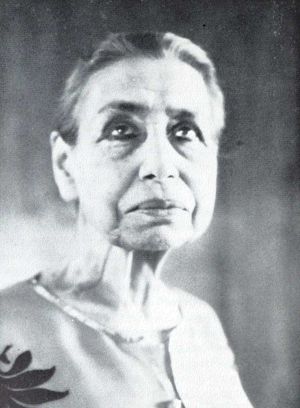 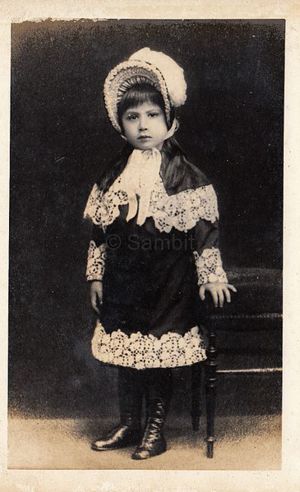 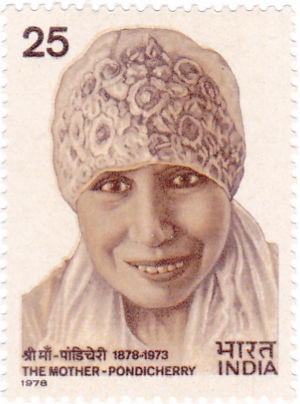