1. In loving memory - a life well-lived.

Mom died the morning of Tuesday, Dec. 23, 2014, at home. She was 94. She was born July 18, 1920, to parents George Edward Allen and Ivy Jessie (Banks) Allen in Renton, Wash. After graduating high school, she attended Central Washington College in Ellensburg, Wash. She returned to the Seattle area and entered the University of Washington. To support the war effort during World War II, she worked as a skin mechanic at Boeing Aircraft in Seattle. Her job was drilling holes in the fuselage and wings for the riveters. She then served a short term with the Women's Army Auxiliary Corps. During this time, she met her future husband, Orville Heinz, at Fort Slocum, N.Y. He was shipped overseas and they wrote letters for three years. Upon his return, they were married, Jan. 19, 1946, in Shawano, Wis. Twelve years and three sons later, they headed west, eventually settling in Clarkston in 1965.

Her life passion was gardening. She was a member of the Clarkston Heights Garden Club and had a master status as a flower show judge. She won numerous awards and ribbons for her flower arranging. If not in the garden, you could find her writing or caring for her beloved animals.

After dad's death in 1978, she pursued her hunger for education. She earned a bachelor of arts in 1982 from Lewis-Clark State College. She then attended classes at the University of Idaho and Michigan State University, eventually attending Ohio University and earning a master of arts in 1994.

She joined the Peace Corps from 1984 to 1986, serving in Honduras and Sierra Leone, Africa. Her love to travel and explore took her to Texas, Mexico, Hawaii, Nova Scotia, Puerto Rico, Panama and elsewhere in Canada.

She was preceded in death by her parents; husband, Orville; son Roney Heinz; brother Roney Allen; and sister Olive Gillebo.

I am my mother's garden; Her loving legacy. And time can't touch the many gifts she gave - they live in me. -Lewiston Tribune [1]

Mom passed away in the comfort of her home on the evening of Dec. 23, 2014, from complications attributed to dementia.

She was born in Renton, Wash., on July 18, 1920, the eldest of three children to George E. Allen of Halifax, Nova Scotia, Canada, and Ivy Jessie (Banks) Allen of Brighton, Sussex, England. She lost her brother, Roney M. in 1937; her mother in 1953; her father in 1969; her husband in 1978; her sister Olive M. Gillebo in 1984' Nancy, the mother of her granddaughter in 1998; and her eldest son, Roney A. in 2004. Those remaining are her former daughter-in-law, Judy of South Bend, Wash.; her son, William J. (Gail); grandchildren, Kami and Cimmeron; great-grandchildren, Michaela, Brittany and Desi; and great-great-grandchildren Brooklyn and London, all of southern Idaho; and her son, Joseph C. of Clarkston.

Mom graduated from Highline High in Burien, Wash., in 1938. Her dad instilled within her a love for gardening and the outdoors, and this inspired her to enroll at the University of Washington in 1940 to pursue a master's degree in botany.

That pursuit was briefly interrupted when she joined the Women's Army Auxiliary Corps in the spring of 1943. In August of that year, she was honorably discharged and returned to Seattle. She continued her studies at UW and at the same time helped build B-17 (Super Fortress) bombers at Boeing. The summer of '45 found her in a lookout tower on the Olympic Peninsula while employed by the U.S. Forest Service; returning to UW that fall. It would be the last semester there before her life took her on a 32-year journey. After completing her W.A.A.C. training at Camp Ruston, La., she was assigned to Fort Slocum, N.Y., where she met a soldier named Orville Heinz.

Dad was discharged from the Army on Dec. 22, 1945, and they were married in Shawano, Wisc., on Jan. 18, 1946. After starting a family and operating a dairy farm for 10 years, they moved to the Northwest where, in time, they bought property in the Clarkston Heights in 1966. Twelve years later, mom was widowed and in need of a way to support herself. That opportunity was provided by the staff of Asotin County Developmental Services, along with the Green Thumb program; her work led to acquiring certification in horticultural therapy from Michigan State University in 1980. During this time, she pursued her degree in botany, accumulating credits that led to bachelor degrees in general sciences, behavioral science and social science, all from Lewis-Clark State College.

In 1984, mom joined the Peace Corps as an agricultural extension volunteer, first being assigned in Honduras, then transferred to Sierra Leone. Upon returning stateside, Mom felt there was more she could do for those she met and worked with. This inspired her to once again return to college, only this time in pursuit of a different degree.

In 1992, she received a bachelor's degree in African affairs and her master's in international studies in 1994 from Ohio University. Unfortunately, having graduated weeks short of her 74th birthday, Mom thought she was a bit too old to be traveling so far away for such a long length of time. Instead, she chose to continue traveling shorter distances for shorter periods of time.

Mom greatly enjoyed visiting England, Scotland and Hawaii with her sister. Elderhostel took her from one Canadian coast to the other, south to Puerto Rico and places in between. Other adventures took her to Mexico, Belize, Guatemala, Panama and, her most loved spot on the face of the Earth, the Wilson Botanical Garden in Costa Rica. With being a wife, mother and homemaker her greatest achievement in life, Mom considered her second being able to bring a 3-year-old village child from Sierra Leone to the Shriners Hospital in Spokane in l986. Even though she was unable to return to Africa, she was able to do one more thing for one more person. Mom had the utmost gratitude for all those who helped her accomplish that endeavor.

Becoming a member of the Synadelphic Co-op while attending the University of Washington in 1940 provided Mom with friendships that lasted a lifetime. She treasured her time while a member of the Clarkston Heights Garden Club and the National Council of State Garden Clubs Inc. Judging flower shows over a span of 61 years ended as a Master Judge Emeritus in 2002. Involvement with church added another purpose to Mom's life, beginning at Our Saviors Lutheran Church in Lessor, Wisc., where she was baptized, and ending at Our Saviors Lutheran Church in Clarkston. It was her beliefs that gave Mom the strength to endure the varied hardships in her life, even to the end. Mom may have lost her memory, but she never lost her faith.

A memorial service will be held in Clarkston when the weather is warm and the flowers are blooming. Other memorials will occur in the Puget Sound area, Canada and Costa Rica. Funeral rites will be conducted in Jaiama Village, Sierra Leone, West Africa. Interment will be in Pulaski, Wisc.[2]

Is Elva your relative? Please don't go away!

ask our community of genealogists a question.
Sponsored Search by Ancestry.com
DNA
No known carriers of Elva's ancestors' DNA have taken a DNA test. 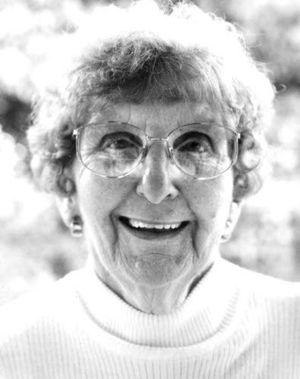