Born about 1608 in England, not 1588.: Matthew Grant's Record of Windsor gives an accounting of the number of children born in Windsor, from the beginning to 1677. The last section of the list contains: some omitted in the former records being gone yet had children born here -- Samuell Alyen 6 children.[1] Having six children in the span of time from his settlement in Windsor to his death in 1648 indicates that Samuel Allen came to Windsor as a young married man and that most of his children were born in Windsor. "As a corollary, it is unlikely that he was sixty at death and born 1588, as sometimes stated an more probably he was some twenty years younger.[2]

Samuel has a memorial stone in Enfield, Connecticut, where many of his descendants are buried.[10] 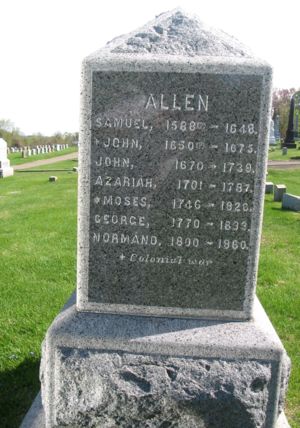 Ellen Smith
Different men named Allen are conflated in this and connected profiles, and some old discredited theories are being revived in the process.

PGM settlers included brothers Thomas Allen of Barnstable & Matthew Allen of (first) Cambridge and (later) Windsor, but Donald Lines Jacobus, in Hale, House, and Related Families: Mainly of the Connecticut River Valley, and Robert Charles Anderson, in the Great Migration books, firmly rejected the oft-stated notion that these men were brothers to Samuel Allen of Windsor (this man).

Anne B
Thanks Ellen, I've reworked the profile, a little making the relationships clear. and disconnected Matthew (and proposed a merge)
posted Dec 19, 2019 by Anne B

Bryan McCullagh
To address Ellen's comment from nearly a year ago (13 Sep 2018), I had already made all of my intended changes at the time I entered my comment. At that time, I believe I had removed all information on this profile (Allen-1644) that pertained to the other Samuel Allen of Massachusetts.

I am hopeful that the current profile represents the most accurate information for this Samuel Allen, and would encourage anyone with more in-depth knowledge to add to this profile.

Leigh Anne (Johnson) Dear
Hello all. While researching another line I came across a neat e-book: Genealogical and Historical Sketches of the Allen family of Dedham and Medfield, Mass., 1637-1890 by Frank Allen Hutchinson (pub 1896). This book records a lot about this Windsor, CT family.
posted Aug 03, 2019 by Leigh Anne (Johnson) Dear

Ellen Smith
Bryan, were you unable to finish your planned changses? It looks like this profile still represents (or has been edited to represent) a hybrid of Samuel Allen of Braintree and Samuel Allen of Windsor. If you simply haven't had time to make the changes, would it be OK with you for some other member to work on refocusing it on Samuel of Windsor?

Note: Samuel of Windsor is briefly treated in The Great Migration, vol. 1, page 40. It is stated that his house at Windsor was mentioned on 18 March 1638/9 and he resided at Windsor until is death in 1648. Also that there is no reason to think that he was the Samuel Allen who was made freeman in the Massachusetts Bay Colony in 1635.

Bryan McCullagh
With regards to the comment by Robin Lee, below, I will attempt to rectify this profile. Robin is correct in that there were two contemporary Samuel Allen's in the New World: one in Braintree MA, and one in Connecticut.

Towards that end, I am removing wife Ann (Whitmore?), removing the Biography information which pertains to the other Samuel Allen of Braintree, MA, and correcting the death date to 1648.

Sheryl Moore
Allen-21888 and Allen-1644 are not ready to be merged because: They could be 2 different generations and the wife wrong on one of them. Further research needed.
posted Apr 05, 2018 by Sheryl Moore