Son of John David Allen and Nellie Austin Phelps Allen. Grandson of John W. Allen, Catherine M Schoonmaker Allen, (paternal) Albert F Phelps (maternal). His maternal grandmother has been seen under several different names: Emily Eastman Phelps, Ellen H Eastman Phelps, Harriet E Phelps.
On his WWI draft registration he was living at 930 Longmeadow St., Longmeadow, MA, and his employer was listed as his father, John D. Allen. His occupation was "Farmer". Hs next of kin was listed as Nellie Allen, mother. He was of medium height and build, with blue eyes and brown hair. He registered for the draft on September 12, 1918.
1900 census, he was 1 year old and living with parents in Longmeadow, MA. His parents were John D and Nellie A Allen, and his siblings with him were Esther P Allen, John W Allen, Ruth C Allen, Albert F Allen. He also lived with his grandmother, Harriet E Phelps, who was a widow.
1910 Census: Living in Longmeadow, MA. He is living with parents John D Allen and Nellie A Allen, and siblings ranging in ages from 18 years old to 1 year old (He was 11). His siblings were Ester P Allen, John W Allen, Ruth Allen (not to be confused with his wife), Albert F. Allen, Philip E Allen, Nellie D Allen, Roger B Allen, Gordon B Allen, and Clara H Allen.
1920 Census: He is living in Longmeadow, MA with his parents, John D. Allen and Nellie Allen. He is also living with his younger siblings, Philip E Allen, Nellie D Allen, Roger B Allen, Gordon S Allen, and Clara H Allen.
In the 1930 Census he was living in Enfield, CT, with wife Ruth Allen (inexplicably referred to as Irene in this census), 2 year old daughter Roberta D. Allen, and newborn daughter Grace Allen (inexplicably referred to as a daughter named Frank in this census?)
1940 Census he is living in Springfield, MA with his mother in law and father in law, Everett E. Bartlett and Luella J. Bartlett, along with his wife Ruth L. Bartlett Allen and his daughters, Roberta Allen and Grace Allen. 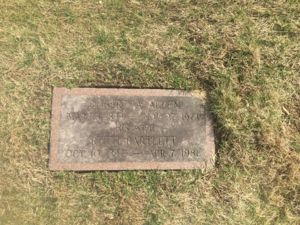