Not Samuel Allen. Do not merge

"In the name of God Amen, I Samll Allin of Northampton Within the County of Hampshire, In her majtis Province of the Massachusetts Bay In New England .... after my funeral Expenses & Just Debts being first Paid ... My wife should have yt Use, or income of all my Estat or so much as she needs During her Life ... unto my son Samll" Several parcels of land are described. "To my Son Thomas Allyne" Several parcels of land are described. "...whereas several Parcells of the abovesaid land bequeathed to two sons Samll and Thomas, Decended to my wife from her honred father Thomas Woodford Decsd ... my son Joseph Children, & so much to my Daughter Hannahs Children: ... to my son Ebenezer ... unto my Grandchildren Noah & Elizabeth Allyn issue of my son Joseph Decesd ... unto my Grandchildren the children of my Daughter Hannah decesd ... to my Daughter Sarah Miller ... to my daughter Mindwell ... Sons Samll & Thomas to be joint executors ... sixteenth day of June ... 1712" Samll Allyn made his mark. A codicil was dated 3 Jan 1714/5. Will proved in court 16 Dec 1719

Children named in will: 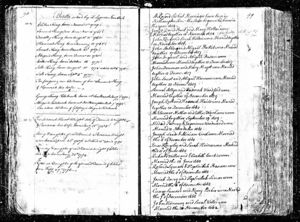 Anne B
Hi Nathan, you have the correct father (Samuel of Windsor) attached but the wrong mother who is also an Ann (currrently Ann Hulbird, but I think that's wrong and she should be Unknown). I am going to fix the mothers so hopefully he won't get confused with the other Samuel again.
posted Jun 24, 2018 by Anne B

Ellen Smith
Allen-21 and Allen-31314 are not ready to be merged because: The Samuel Allen in Bridgewater and the Samuel Allen in Northampton are different men that keep getting conflated. Need to keep them separate.
posted Jun 23, 2018 by Ellen Smith