Major General Arthur Samuel "Tubby" Allen CB CBE DSO ED was a decorated senior Australian soldier. During the Second World War he reached the rank of Major General and commanded Allied forces in the Syria-Lebanon and New Guinea campaigns. Allen was frequently referred to during the war by the nickname "Tubby"; an indication both of his stocky build and the affection with which he was regarded by both soldiers and the Australian public.

Upon completing his formal education at Hurstville Superior Public School, Arthur gained work as an audit clerk with the New South Wales Government Railways. He had served in the compulsory cadet scheme while at school and then the 39th Battalion of the Militia. He was commissioned as a Lieutenant in 1913.[3]

Arthur Allen CB CBE DSO is an Anzac who served in World War One.

Allen transferred to the Australian Imperial Force (AIF) on 24th June 1915 and embarked for Egypt with reinforcements for the 13th Battalion in August.[4] In March 1916 he was promoted to Captain and assigned to the 45th Battalion. He arrived in France on 8th June 1916 and fought at the battle of Pozières in August. Allen remained in the front line on the Somme into 1917 and led his men through the battle of Messines in June. His leadership amidst heavy losses earned Allen appointment to Companion of the Distinguished Service Order (DSO)[5] and promotion to Major. He continued to lead men in combat, at the battle of Dernancourt in April 1918, and then as an acting Lieutenant Colonel, in command of the 48th Battalion, at battle of Monument Wood. In June 1918, Allen went to England to attend the Senior Officers’ Course at Aldershot. Less than two weeks after the war ended, at the age of 24, he was promoted to Lieutenant Colonel and given command of the 13th Battalion. He was awarded the French Croix de Guerre for his service on the Western Front. His appointment with the AIF ended on 10th November 1919.[3]

Allen returned to accounting, but remained active in the Militia, successively commanding the 13th, 41st, 18th and 36th Battalions. He was awarded the Efficiency Decoration (ED) for twenty years service as an officer in the militia.[3]

He gained his Associate of Commonwealth Institute of Accountants in June 1922. Establishing himself as an accountant, he became a partner in the firm of Truman Harrison & Co., Sydney, and a Fellow of the Institute of Chartered Accountants in Australia (1932).[3]

Upon transferring to the 2nd Australian Imperial Force on 13th October 1939[8], Allen was given command of the 16th Brigade in the 6th Division.[9] In Palestine, he quickly forged good relationships with Allied force personnel and with the civilian populace. He improved the standard of the camps both for his men and those who would follow. His work was rewarded with appointment to Commander of the Order of the British Empire (CBE).[10] In January 1941 in North Africa, Allen led the brigade at Bardia and Tobruk, before being despatched to the ill-fated campaign in Greece and Crete. A shining light in that lost cause, he was awarded the Greek War Cross.[11] Shortly afterward, Allen was given command of the 7th Division, and commanded it in the invasion of Syria and Lebanon, against Vichy French forces. Allen was officially promoted to Major General in August 1941 and was appointed Companion of the Order of the Bath (CB).[12]

Following the outbreak of war with Japan, the division returned to Australia. In August. Allen took charge of operations against the Japanese advance along the Kokoda Track. Hugely successful, Allen nevertheless came under unfair criticism from the Allied commander in the South West Pacific Area, Uunited States General Douglas MacArthur and the Allied land forces commander, Australian General Sir Thomas Blamey (sitting comfortably in their Brisbane and Melbourne office suites), for moving too slowly in pursuit of the Japanese across the Owen Stanley Ranges. He was subsequently relieved of his command on 29th October 1942. Lesser appointments followed, but in October 1944, Blamey recommended Allen be made a Knight Commander of the Order of the British Empire (KBE); although Allen was never appointed. Allen was placed on the Reserve of Officers (a way of telling generals they are no longer required), aged barely 51 years of age, on 30th April 1945. His wealth of front-line experience remains rare to this day amongst generals of any army. A knighthood, which would have been automatic in The Great War, did not eventuate.[3]

The rejection took its toll on "Tubby". Nevertheless, anybody with a semblance of work ethic will seek something worthwhile to do. Arthur Allan, with well-defined leadership skills and an accountancy background, found no shortage of companies offering a directorship. He also established A S Allen & Co., chartered accountants of Sydney; becoming senior partner. He honed his, until-now, low recreational skills with golf and bowls.[3]

At just 64 years of age, on 25th January 1959, he passed away of hypertensive cerebrovascular disease in the Repatriation General Hospital, Concord, New South Wales.[13] If it were possible, "Tubby" Allen would have had a wry smile during his funeral with full military honours. He was survived by his wife, Agnes, and two sons.

Thank you for your service, "Tubby" Allen 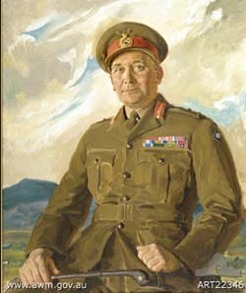 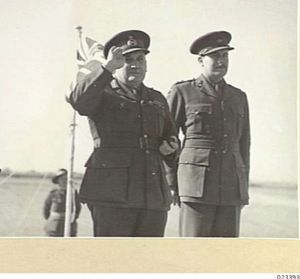 Arthur is 32 degrees from Danielle Liard, 25 degrees from Jack London and 18 degrees from Henry VIII of England on our single family tree. Login to find your connection.