Mr. and Mrs. Olin O. Allen of Tyler will celebrate their 60th wedding anniversary with a reception Sunday afternoon at the home of their son, Michael Allen of Tyler.

Mr. and Mrs. Allen were married July 4, 1921 at Frankfort, Ind. They moved to Tyler in 1972 and are members of Green Acres Baptist Church.

Mrs. Allen, the former Velma Moore, is a native of Logansport, Ind. She is a member of Eastern Star of Elkhart, Ind.

Also, a native of Logansport, Mr. Allen is a retired conductor for New York Central Railroad of Elkhart. He is a member of Masonic Lodge and Kane Lodge of Elkhart; Scottish Rite of South Bend, Ind., and Eastern Star of Elkhart.

The reception will also be given by their other son, Philip O. Allen of Bradenton, Fla.

Records of the Railroad Retirement Board, 1934 - 1987; Record Group Number: 184. The National Archives at Atlanta; Morrow, Georgia.

Is Olin your ancestor? Please don't go away!

ask our community of genealogists a question.
Sponsored Search by Ancestry.com
DNA
No known carriers of Olin's DNA have taken a DNA test. 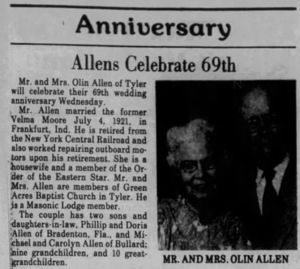 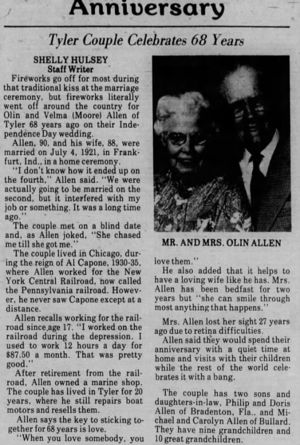