John A. (Allen) Anderson was born about 1844 in Columbia, Pennsylvania. He was the child of Rebecca and John Anderson. He and his sisters Mary and Rebecca shared the Allen surname in 1850, but thereafter were Andersons. Mostly likely they were Rebecca's children from a previous marriage and took their stepfather's surname, but it's also possible the couple adopted the Allen children.

He served with the famous 54th Massachusetts Volunteer Infantry during the American Civil War.

He was a lifelong resident of Lancaster County, Pennsylvania.

In 1860, he is attending school, probably in or near Marietta, Pennsylvania.

During the Civil War, he served as a Private in Company D of the 54th Massachusetts Volunteer Infantry, the second[1] regiment in the United States made up entirely of enlisted men of color. He was about 19 years old, single and working as a shoemaker[2] when he enlisted on 19 March 1863 in Lancaster, Pennsylvania. Mustered out 20 August 1865 with his regiment.[3]

Note: There is also a John W. Anderson in Co. D.

He is buried at Zion Hill Cemetery in Columbia, Pennsylvania. 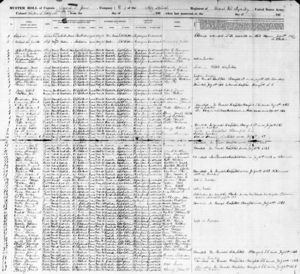 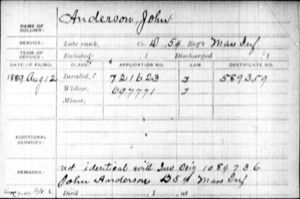 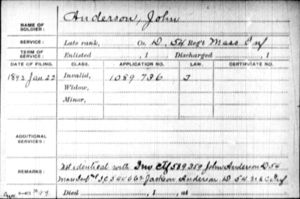 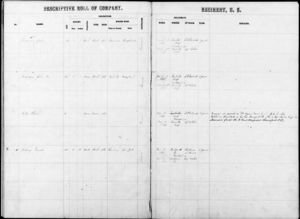