The Story Of Sarah Allen

Sarah was taken to Kahnawake (aka Sault-St-Louis) and kept there for a while before being sold to Jean Quenet a Montreal merchant. One of Jean Quenet's properties was at Baie D'Urfé and that is where Sarah worked as a domestic. On the 30th of May 1705 Sarah was baptised with the name Marie Madeleine Sire Hélène at Sainte-Anne de Bellevue[1] her godfather being Pierre Lamoureux and her godmother Etiennette Hurtubise, wife of Jean Quenet. The record states that she had received lay baptism in her country.

Under the name Marie Madeleine Hélène, she married Guillaume Lalonde, son of Jean Lalonde and Marie Barban, on April 27th, 1710 in Ste-Anne de Bellevue, her parents being listed as Nedade Hélène and Mince Nepi of Tierfille (sic).[2][3] In May of that year she was naturalized in New France (see note). She had 13 children with Guillaume, 9 boys and 4 girls. 8 of the boys married and helped spread the Lalonde name.

She died on 25 December 1764 and was buried on the 25th in Les Cèdres[4], listed as Madeleine Hélène, widow of Guillaume Lalonde, the record giving her around 80 years of age.[5][6]

Most of the accounts about the New England captives have come from New England sources as not very much has been written about these people in Quebec. There have been two studies in French in recent times. The Société Généalogique Canadienne- Français, has done some studies recently and published a book on the subject by Marcel Fournier. In fact Fournier has identified 455 captives from New England who settled in New France from 1675 to 1760. He estimates that to be only one third of those who passed through New France but only stayed for a few years. When you consider these numbers against the population of the time, New France went from 3,300 in 1666 to 60,000 in 1760, it is quite significant. In fact this becomes the third main source of immigration to New France after 1665. The first, the 400 of the Carignan-Salières regiment (Jean De Lalonde), the second the 400 filles du roi (Marie Barbant) and the third the captives from New England (Sarah Allen). The rest of the population growth came from the large families.

And now we come to the fateful day that Sarah was captured and her life changed forever. From an English speaking puritan of New England she was transformed into a French speaking catholic mother of 13 in New France. We can only wonder how that transformation took place and what kind of person she was. We do know that she was educated in that she could read and write. On her marriage certificate she signed her name while Guillaume could not. In fact none of the early Lalondes could write and this was very common in New France. In 1700, New France had a population of about 15,000 as compared to the 100,000 in New England. It is no wonder that Governor Vaudreuil, mindful of the population difference, was quite concerned about the British and took every opportunity to keep them off guard and keep the Indians as allies.

The following is an account of the attack from New England Outpost: War and Society in Colonial Deerfield, Richard I. Melvoin (1989):

By 1704 the town has grown to 260 people. The size of the town suggests stability. Yet like its predecessors Deerfield lies alone and exposed on the frontier. There are still no English settlements west of Deerfield for fifty miles, until one reaches the Hudson River and New York. Nor are there English towns north of Deerfield at all. To the east, too, lie forty miles of wilderness.

The late summer of 1703 has been a time of great anxiety. Activities of late spring have once again brought forth these fears. In May, early in the conflict known as Queen Anne's War, New York governor Lord Cornbury sent word that French soldiers and allied Indians from Canada were heading for Deerfield and the Connecticut valley. As of September a stressful summer has passed peacefully. Then in October, a small Indian force strikes, capturing two Deerfield men. Tensions heighten; the town strengthens its fortifications; the Massachusetts General Court sends soldiers to help protect the town. As of December, though, all is quiet. The cold and snow of winter now promise further respite, for in 1704 wars are not fought in the depths of winter.

But now the quiet of the winter is about to be shattered. Two hours before dawn on the fateful leap- year morning of February 29, 1704, Deerfield's inhabitants lie asleep inside the town's palisade. Because the Indian threat remains, all the town's residents, including the twenty Massachusetts soldiers just arrived from Boston, sleep in the dozen houses inside the fort. The other thirty or so houses outside the palisade lie empty. A watchman is assigned to patrol the town through the night. In the pre-dawn hours, however, he proves unfaithful to his duty. That breach of faith soon proves fatal.

Two miles north of town, just across the Deerfield River, lies a military force of two hundred to three hundred French and Indians. These men have traveled close to three hundred miles to reach this spot. Now they are ready to attack. Silently they cross the river and traverse two miles of open farmland toward the sleeping town. They are able to move quietly, for deep snow dampens all sound. Winter aids them in another way as well. Heavy drifts have piled snow against the walls of the fort, drifts so high that the attackers can easily scale the walls. Without a night watch to contend with, the warriors quickly move inside. The signal comes -- a cry rings out -- and the attack begins.

Although the townspeople fight back bravely, the French and Indian force is too strong and their advantage too great. Even the reinforcements who charge up from Hadley and Hatfield cannot turn the tide. At battle's end, the survivors grimly assess the town's losses. Fifty-six English men, women, and children lie dead; another 109 have been captured. In all, three-fifths of the town's people are gone. Almost half the houses have been burned. Deerfield is not abandoned because the region's military commander will not allow it. As it is, the town barely clings to life. Edward Allen, Sarah's father is named city clerk to replace the previous clerk, Thomas French, who was killed in the battle. It is years before survival is assured.

And so the captives make the long trek to Canada through the winter snow (see map). Sarah arrives at Fort Chambly at the beginning of April 1704. The next official record we have is her baptism on May 30, 1705 at Ste-Anne de Bout de L'Ile. At that time she is a domestic in the home of Jean Quenet at Baie D'Urfé. Five years later she marries Guillaume Lalonde and this Lalonde Family has 13 children, 9 boys and 4 girls.

Naturalization letters were given to all the people listed below, including Madeleine Allen, the source document contains a link to original documents internally.

Is Marie Madeleine your ancestor? Please don't go away!

ask our community of genealogists a question.
Sponsored Search by Ancestry.com
DNA Connections
It may be possible to confirm family relationships with Marie Madeleine by comparing test results with other carriers of her mitochondrial DNA. Mitochondrial DNA test-takers in the direct maternal line: It is likely that these autosomal DNA test-takers will share some percentage (beta) of DNA with Marie Madeleine: 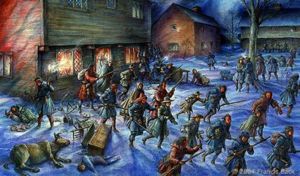 Andrew Simpier
This is such an amazing story of my 6th great grandmother. Wow!
posted Aug 20, 2018 by Andrew Simpier

E Martin
Allen-7138 and Allen-4373 appear to represent the same person because:

posted Oct 16, 2017 by [Living Calonnec]
Marilyn Vanderville
Allen-7138 and Allen-4373 appear to represent the same person because: Same person. She was born Sarah Allen. Taken as a hostage and sold to the French. In Quebec she as baptised and took the name Marie Magdeleine. The following year she married Guillaume Lalonde.
posted Mar 30, 2017 by Marilyn Vanderville
James LaLone
Allen-7138 and Allen-4373 need tobe merged as they are the same person. Marie-Madeleine was the baptismal name for Sarah when she was taken to Quebec.
posted Mar 24, 2016 by James LaLone