Rial Allen was born in 1791, the son of Samuel Allen and Nancy Easter. Part of his boyhood was spent in South Carolina in Chester County, the home of the Easters. When Rial was 13 years of age, his father Samuel Allen, with the Adams, Easters, Warrens and others left Chester county, So. Carolina and traveled north to Kentucky to make their home. The reason for this migration was the desire to follow the game to the north. Game was getting scarce in the Carolina’s and the early pioneers of that time depended greatly upon the deer and other wild game for their livelihood, began to follow it toward the north where the woods were more dense and their quest more plentiful. Here Samuel Allen built a home in a beautiful valley where Rial and his sister and brothers were reared.

Rial married Margaret Evins, daughter of John Evins and Mary (Margaret) Moore, on 21 October 1806( found on page 20 of Marriages book one, Pulaski County, Kentucky, listed like this, Rial Allen and Peggy Evins 21 Oct 1806 by Thos. Hill). Margaret was born in 1784, making her some six or seven years his senior. This was not an unusual occurrence after a great war like the Revolution.

James Allen, their first son, was born in 1807, so if the date 1791 is correct, for the birth date of Rial, he certainly married very young, as James would have been born when Rial was only 16 years of age. We only have two positive birth dates for the children of Samuel Allen; Frances or Frankey, his first daughter born 6 May 1784 and his last child, Samuel Jr. who was born 15 September 1799. Between 27 August 1782 when Samuel and Nancy were married, and the year of Samuel Jr’s birth, there were 5 children; John, Frances or Frankey (s girl), Rial, David and Samuel, Jr. As David is the only child between Rial and Samuel, there has always been a doubt in my mind as to Rial’s year of birth as we now know it.

Rial bought a place some two miles from the original place of his father’s, and here his children were born. The home of Rial Allen was made of logs. This house was on a hill but he moved it down by the river, and after it was moved, he sawed off all the eaves so that the witches would not molest him for it’s removal. The house was one of the finest homes there at the time it was built. It was made of logs with a window on each side of the fireplace, as was the style at that period. Years later it was weather boarded and made to look more modern, and the eaves were again built out.

When his sons decided to go with their cousins, the children of David, to Missouri, he sold his home to a man named Adams and went with them. Descendants of Adams still are the owners of the property.

Margaret Evins Allen died 17 September 1843 and is buried at Waitsboro, Kentucky. Rial never married again, but moved to Missouri with his children. He settled in St. Joseph, Andrew county, Missouri. He prided himself upon his thoroughbred cattle and horses. He possessed the finest stock in the vicinity.

The children of Rial and Margaret Evins Allen are:

Elizabeth or Betsy as she was called, and her husband had no children and always made their home with father Rial. He built a fine home in 1862. This was not quite completed when on the 30 May of that same year, James and Lewis started on their journey to the west to join the Saints.

Four of Rial’s children had embraced the gospel of Jesus Christ of Latter-day Saints. It was a source of much grief to Rial that they would desire to go further west and pioneer an unknown waste, when there were such prosperous farms in Missouri.

James and his entire family, and Lewis and wife and children, all except Mary Ellen (who was born later in Washington Co., Utah) started out on 29 May 1862, on the birthday of Lewis’ daughter, Sarah, for the West. There was one team of horses in the crowd. Lewis had three covered wagons pulled by oxen, James had two covered wagons pulled by oxen and one buggy and a span of horses.

Grandfather Rial went over to see them and they all felt like they wanted to stay one more day with their loved ones. But James had gone on one day ahead and so they felt like they must go. Grandfather Rial and his daughter Betsy and husband Sprankle Snyder went part way with them that day, so it would seem easier and not so hard to make this last sad parting.

Grandfather Rial never joined the Church, in fact he was a little embittered that his sons joined it and came west. A short time before his death he offered his son, Andrew Jackson, $800.00 if he would return to Missouri and live, but in answering Andrew Jackson said “no amount of money in the world could induce him to leave the Church, but if his father wished to send the money, he could surely make good use of it.”

Grandfather Rial was not a big man, but stood very straight, he was not so heavy, but of medium weight. He was of medium complexion and at this date was getting grey, he had blue eyes. He was of a kindly disposition and gentle in his ways. Of his sons, James was most like him in build and disposition.

This history was compiled by Maud B. Allen of Salt Lake City and information was obtained from Pulaski County, Kentucky records, Andrew Jackson Allen’s journal and interviews with Sarah Allen, Rial’s granddaughter, who lived with him until she was 8 years old. [1]

Thanks to Nev Dansie for starting this profile.

Is Rial your ancestor? Please don't go away!

ask our community of genealogists a question.
Sponsored Search by Ancestry.com
DNA Connections
It may be possible to confirm family relationships with Rial by comparing test results with other carriers of his Y-chromosome or his mother's mitochondrial DNA. Y-chromosome DNA test-takers in his direct paternal line on WikiTree: It is likely that these autosomal DNA test-takers will share some percentage of DNA with Rial: 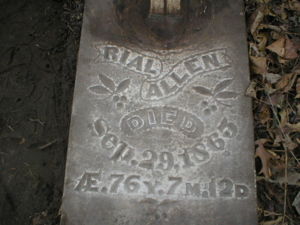 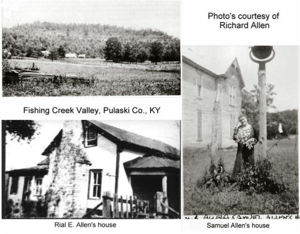 Darlisa Black
Thank you for creating such a great page for Rial Allen. He was my third great grandfather on my father’s father‘s side. Isaac Edwin Black married Nancy Esther Allen.
posted Oct 25, 2021 by Darlisa Black