Raised in a cosmopolitan Palermo court with Greek and Muslim teachers, he was fluent in Latin, Greek, and Arabic (Italian / Sicilian did not exist at the time, being an unwritten dialect of the lower classes, which gradually formed from Latin) and therefore was able since young age to treat and discuss with other rulers in Sicily or abroad.[1]

He started a policy to consolidate his position and to extend it to Malta and to the Muslim coast of Africa. Reaching majority in 1112, he took control of the government and showed political and administrative skill. He granted equal rights to all citizens, including Muslims, Catholics, Byzantine Greeks, Lombards, and northern Europeans.[1]

In 1126 his cousin Guglielmo duke of Apulia died without heirs, so he had the opportunity of expanding to the continental part of the Altavilla domains without fighting and moved across the Messina straits to take possession of the south of Italy, merging all Norman possession and in the yars '28-'29 his domains were extended also to Naples, Bari, Capua that were still independent.[1]

However Pope Onorio and his successor Innocenzo II did not want to be bordered by a large and well administered modern state, that was unwilling to fight non catholics religions as Greek Orthodox, Hebrew, Moslem and considered equal rights of all citizens. The same was true for some of more important Dukes and Counts,among them his son- in- law Rainulfo di Alife, not used to a central government. This caused some years of unrest, civil war and excommunication, but ended with Roberto being crowned King of Sicily at Palermo in 1134. This is considered the origin of the Kingdoms of Naples and of Sicily which merged in 1816 into the "Kingdom of two Sicilies".[1] If Ruggero I and Roberto ilGuiscardo founded the Norman domain in the south of Italy, Ruggero II completed their task by founding a real state also from the political point of view.The court in Palermo was considered the richest in Europe. The arts and sciences were promoted until Ruggero II died.[1] 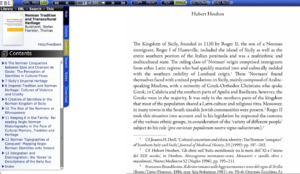 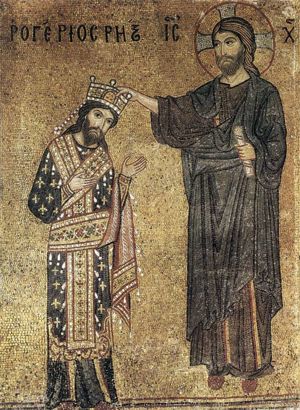 I do not object to the use of names in the same language used to write the biography, provided that they are in accordance with the names used in the first part of the profile and with the guidelines . But brothers with different family names or names unrelated to their parents generate a lot of confusion as well as mixing titles with family names (house of....) and other small mistakes. But , above all, I do not consider a real "biography" just a list of names of relatives and dates added as duplicates (often in a slightly different and confusing form) that are or should be already written in the first part of the profile accordig to the template provided. More details on wives, siblings, children can be introduced in most cases by adding to or opening their profiles . G.B

I have not copied the biography, but written a summary in English of historical data that can be found on all books about Ruggero II, Normans in Italy, and in general the Italian history of that period, as we study at school, quoting two Italian authoritative sources among many existing ( see also the the text in English that was added as image N°1 not by myself). G.B.

John Atkinson
I've restored the biography for the moment, but basically biographies shouldn't be copied from other sources and should be have inline citations to show sources for the facts. Names in biographies don't necessarily have to be in the correct language, eg if the bio is in English then the names could be in English. Bios can be written in a range of different languages, so there could be a bio in Italian, where obviously the names would be in Italian as well.
posted Dec 01, 2017 by John Atkinson

Gino Baracchi
A proper Biography, i.e. mentioning the relevant actions, achievements, historical events, personal features of Ruggero II giving an idea of the personage and of his contibution to History was removed. Why? What remains is only a double, with more details, of the list of relatives that should already appear on the first part of profile (with correct names in accordance to guidelines!!!)
posted Dec 01, 2017 by Gino Baracchi

Gino Baracchi
Sicily-11 (Roger II, King of Sicily) is endeed the same person as Altavilla-5 an shall be merged .

count and King of"Sicily" were titles held by different families from XI to IX century and an "house of Sicily" never existed nor families having this name. Therefore the names of members of the Altavilla family that ruled in the south of Italy after Roger I Hauteville, conte di Sicilia (born in Normandy,present France) shall be corrected into "Altavilla", as well as their siblings, childs, etc. Moreover Roger I and his brothers are designated with the latin name "Alta Villa" even on the Bayeux tapestry made at the court of William the Conqueror. All profile managers are kindly invited to standardize avoiding "Sicilia, Sicily, Hauteville, d'Hauteville for the southern Italian branch

Ruggero II is 26 degrees from Jaki Erdoes, 21 degrees from Wallis Windsor and 12 degrees from Henry VIII of England on our single family tree. Login to find your connection.