Sir Jeffrey Amherst was a member of the aristocracy in British Isles.

Field Marshal Jeffrey Amherst, 1st Baron Amherst of Holmesdale (1716/7-1797) was the son of Jeffrey Amherst and Elizabeth Kerrill. He m.(1), firstly, Jane Dalison, daughter of Thomas Dalison and Jane Etherington, on 20 May 1753 at Gray's Inn Chapel, London, England and (2) Elizabeth Cary, daughter of Lt.-Gen. Hon. George Cary and Isabella Ingram, on 26 March 1767 at Clifford Street, St. James's, London, England. He died on 3 August 1797 at age 80 at Montreal, Kent, England, without issue from either marriage.

Amherst served as a soldier for much of his life, and he rose to the rank of Field Marshal on 30 July 1796. He was the Governor of Virginia between 1759 and 1768 and Governor of Guernsey between 1770 and 1797. He was created 1st Baron Amherst of Holmesdale, Kent [Great Britain] on 20 May 1776, and was later created 1st Baron Amherst of Montreal, Kent [Great Britain] on 6 September 1788, with a special remainder to his nephew and heir, William Pitt Amherst, 1st Earl Amherst.

Both marriages proved childless, though Amherst had a natural son and namesake (c.1752–1814) who rose to the rank of major-general; the identity of his mother is unknown. Possibly the Maj.-Gen. Jeffrey Amherst whose son Capt. Jeffrey Reid Amherst, RN d. 1880.[3]

Is Jeffrey your ancestor? Please don't go away!

ask our community of genealogists a question.
Sponsored Search by Ancestry.com
DNA
No known carriers of Jeffrey's DNA have taken a DNA test. 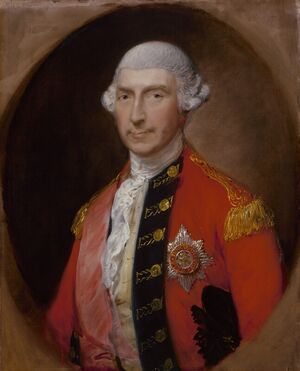