Hans Christian Andersen, the son of shoemaker Hans Andersen and washerwoman Anne Marie Andersdatter, was born 2 Apr 1805 in Odense, Denmark.[1] He was christened on 16 Apr 1805 at Skt. Hans Kirke in Odense.[1]

H.C. Andersen was close to his paternal grandparents. They lived in Pogestræde only a stone's throw from his childhood home. Andersen was particularly close to his grandmother Anne Cathrine Nommensdatter daughter of very poor troop drummer Nomen Nommensen and wife Karen Sørensdatter. Anne Cathrine Nommensdatter was born in Odense in December 1745, married December 1781 to Anders Hansen and died aged 76 in 1822.

The grandmother was in many ways a guardian angel to H.C. Andersen. What she was unable to do for her own child she did for her grandson. Levnedsbogen is launched with a typical description of the talents of Andersen's father. He was "outstandingly bright", Andersen writes, in fact, so bright that the wealthy citizens offered their financial help so that he might continue his studies. But the father of this prodigy child would not hear of it. He "insisted", Andersen continues stressing the verb insisted - for the son to become a shoemaker." A few pages further on it reads that Andersen's father was very kind to his mother, but he could not "forget that the mother never fought against the father so that he, the son, could continue his studies".

The relationship between H.C. Andersen's father and his parents may have been quite reserved, as it is highly remarkable that Andersen was born in the house of his aunt and not in the home of the grandparents. It is even more astonishing that the grandparents did not help Andersen's parents financially, as the paternal grandfather was rather wealthy at some point.

This was quite unusual but Andersen's grandfather was mentally ill. In Andersen's journals, memoirs and literary work the grandfather haunts him like a nightmare. The grandfather is also mentioned in other people's memoirs, people who lived in Odense at that time. Anders Hansen was a journeyman shoemaker who ran away from his master and was fined for it. He had a liking for carving strange wooden figurines, ran about in the streets wearing paper hats and eventually succumbed to insanity.

The situation became so grave that H.C. Andersen's mother had to ask her son to write a letter to the mayor imploring him to place the grandfather in Gråbrødre Hospital - a lunatic asylum. The permission was granted but poor Anders - or "Traes" as he was called managed to escape only to be caught later on and eventually admitted to the bedlam. He died poor and demented in 1827 aged 72. After the admission Anders Hansen's belongings were divided leaving Andersen as sole heir. Apart from the house, there was nothing of worth, until the probate court found small boxes containing fifty rix dollars in current notes plus more than two-hundred rix dollars no longer in stock. This seemingly great fortune was worth nothing in 1822, since the National Bank refused to convert old notes to current ones. Anders Hansen could not profit from his stored savings nor could the sole heir at the winding-up.

'Mad' Anders "Traes" Hansen came from Rørup. Born and baptised in Hækkebølle in 1754. Son of Hans Gormsen and Maren Andersdatter. The county proprietor in Erholm had given them a copyhold farm which they operated very well indeed. Anders Hansen was the youngest in a crowd of three. The father, Hans Gormsen died aged 29, when the small son was but one year old. The father's death devastated the family.

In order to keep the farm going the young widow married farmhand Jørgen Hansen who had served under the rural dean in Gelsted. Reading the probate court report is impressive: Each child received twenty rix dollars right away, a bed of their own, a chest of drawers and a cow. From this information one can gather that it was a rather wealthy estate. Since all the children were minors the value had to be tied up in the estate until further notice.

As the older brother - according to tradition - would take over the farm it was only natural for Anders Hansen to become a craftsman and head for the market town. It was there he met the future grandmother of H.C. Andersen. In the first sentences of Levnedsbogen H.C. Andersen accounts for the disaster, which struck down on the small farm family, stating the reason for being sick livestock. It had the 'desired' effect: hardship resulted in H.C. Andersen's grandfather becoming deranged.

Storyteller Andersen tells us that Anders Hansen's wife, Anne Cathrine Nommensdatter, was a noble grandmother from Kassel. But due to love of a "comedian" the young lady had eloped thus heading straight for poverty. This was not quite the case. Anne Cathrine's grandmother was a poor girl from Assens named Karen Nielsdatter; she did not elope with a comedian but married town post-rider Søren Jensen.

However, the poet's great-grandmother - child of the above Karen and Søren - Karen Sørensdatter did marry Nomen Nommensen from Schleswig in Kappel in November 1742. Nomen Nommensen was a very poor hatter who later on, upon arriving in Odense, assumed the humble yet secure position as troop drummer. And the claimed poverty was correct. The family was indeed extremely poor.

After the death of Nomen Nommensen in 1787 his widow and five children lived with an older daughter and son-in-law in Pogestræde. Karen Sørensdatter died a pauper at Doctors Boder in 1799, so poor that there is no record of her in the parish register or the probate court.

This sad story is coming to an end but let us draw attention to the blossom planted by H.C. Andersen on his family tree, and the joy he brought into so many homes across the entire world because of his stories. It is very happy news that H.C. Andersens Hus most likely is the birthplace of the poet. We are so pleased of having been made aware of new information about his maternal family.

Further investigation into the lineage of H.C. Andersen has now been made possible and if one intends to study the family tree further, many will be able to flaunt their relation with the great poet.

Thanks to Merissa Jensen for starting this profile. Click the Changes tab for the details of contributions by Merissa and others. 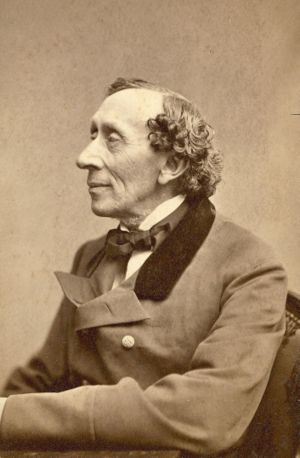 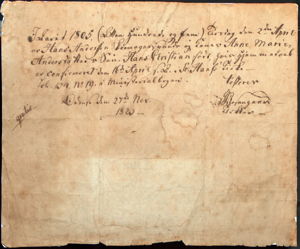 Leave a message for others who see this profile.
There are no comments yet.
Login to post a comment.
Per Starbäck
Anderson-10025 and Andersen-1789 appear to represent the same person because: Judging by dates and sources it's evident that Anderson-10025 is also actually about the famous author.
posted Apr 21, 2018 by Per Starbäck