When John and James Dillard migrated from Buncombe County, North Carolina to Rabun County, Georgia about 1823, Barnards, McKinneys, Hoppers, Andersons and Dickinsons came with them or shortly thereafter. These families were already or would soon become interrelated. Rabun County, Georgia would appear as though Buncombe County, North Carolina had been transplanted.

William McKinney was one of the first settlers in Rabun County of the Valley District at Betty's Creek between 1820 and 1830. He was married to Margaret (Elvira) Anderson McKinney known as "Peggy". Ritchie indicates both emigrated from Buncombe County, North Carolina. Censuses verify that both were born in North Carolina...

William McKinney died one year before the 1860 census, which listed Margaret McKinney, age 58, with children Marshall, age 23, Doctor T., age 20 and Margaret, age 17. Margaret Anderson McKinney was listed as the owner of two slaves in 1862. Margaret Anderson McKinney was for reasons unknown not listed in the 1870 Census. She was listed on the 1880 Census as a 78 year old mother-in-law residing with Leander M. Beavert, then age 50, a former captain in the Confederate Army and Sheriff of Rabun County, and his wife, Margaret C. Beavert, then age 36, with Ella Lawrence, age 25, "a servant" born in North Carolina and Minnie M. Lawrence, age 4, her daughter. Margaret Anderson McKinney lived to the ripe old age of 92 and died on March 25, 1893...

ask our community of genealogists a question.
Sponsored Search by Ancestry.com
DNA Connections
It may be possible to confirm family relationships with Margaret by comparing test results with other carriers of her mitochondrial DNA. However, there are no known mtDNA test-takers in her direct maternal line. It is likely that these autosomal DNA test-takers will share DNA with Margaret: 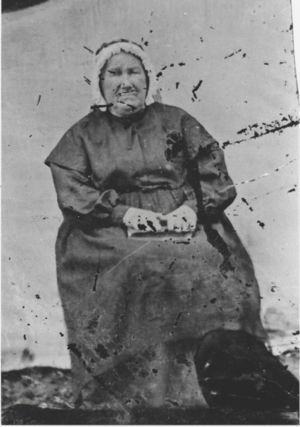