Children of Kenneth and Hannah Anderson.

SOURCE: William N. Mervine, "John Anderson," Proceedings of the New Jersey Historical Society, volume 7, no. 2 (1912): 84. A different conclusion was reached by Donald Lockhart, TAG: 83 no. 1, (Feb 2009): 1-12 as to Col. Kenneth's wife's maiden name being Hannah Hankinson. Because there were other Hankinson marriages within the family and other similar named persons, that conclusion led to the combining of Anderson's wife Hannah with multiple persons in Family Tree that gave Hannah several different incorrect husbands and families of children. It also raised the question of other opinions about the spouse of Hannah Hankinson. There was another Kenneth Anderson, nephew of this person, alleged to have married a Hannah Hankinson. With these discrepancies it may be wise to leave Hannah for the present as Hannah with the 2 children that do belong to this couple, until there is further resolution to the disagreements, lest there be another round of wrong combinings.

Is Kenneth your ancestor? Please don't go away!

ask our community of genealogists a question.
Sponsored Search by Ancestry.com
DNA Connections
It may be possible to confirm family relationships with Kenneth by comparing test results with other carriers of his Y-chromosome or his mother's mitochondrial DNA. Y-chromosome DNA test-takers in his direct paternal line on WikiTree: It is likely that these autosomal DNA test-takers will share some percentage of DNA with Kenneth: 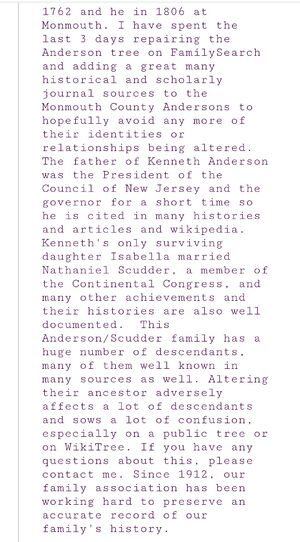 Kenneth and The Anderson Comfusion

Leave a message for others who see this profile.
There are no comments yet.
Login to post a comment.
Joel Bridgham
Anderson-57439 and Anderson-29878 appear to represent the same person because: Birth dates are two days apart. Some disagreement on birth and death towns. Otherwise, a good match. Anderson-29878's Biography refers to him several times as "Col." Both profiles agree that he is buried at the Old Tennent Church Yard, Tennent, Monmouth, New Jersey
posted Dec 09, 2021 by Joel Bridgham
D Ridley
I'm having trouble correcting things in the geneology, on wiki tree and other geneology websites but I'm trying to fix, what I see and adding sources.
posted on Unknown-544438 (merged) Jan 28, 2021 by D Ridley

H Husted
Hello, from the biography I understand his marriage to Hannah Hankinson is debatable, but the names of his daughters are correct?

I adopted Isabella (Anderson) Scudder and she doesn't currently have any sources or parents; it would seem we could him as her father. Let me know if this is okay.