He was born 8 December 1749 in Oslo, the son of Christian Anker and Karen Elieson. He was baptized at Oslo Domkirken 16 December 1749.[2] He grew up in his parents' home in Oslo, with his brothers Bernt, Jess and Iver.

On 26 October 1772, Peder married Anna Elisabeth Cold in Oslo;[3] she was the daughter of Justice Isaac Andreas Col and Elisabeth Cathrine Nissen. She was the foster daughter of the childless Mathia and Morten Leuch at Bogstad.

Peder and Anna were the parents of four children; however, the first three died as infants and only the fourth child, daughter Karen, grew up and survived the parents. In 1807 she married Herman Wedel-Jarlsberg, and they inherited the Bogstad estate from her father.

Merchant with ambitions "After a two-year stay at the University of Copenhagen, he was sent on a five-year trip abroad with his brothers and their cousins ​​Carsten and Peter Anker. The foster mother of his wife Anna Elisabeth, Mathia Leuch, married his brother Bernt Anker the following year, and Peder bought Bogstad farm with associated forest properties and sawmill in 1773. These were further increased by purchasing forests north and west of Randsfjorden."[4][5]

"In 1778, Peder Anker and his brothers and uncles succeeded in being admitted to the nobility by claiming that the family came from an extinct Swedish noble family called Anckar (who had been ennobled in 1625 and who died out in 1645). This did not happen through nobility of the Norwegian noble family, but through naturalization on the basis of the claims that the family belonged to the Swedish noble family Anckar. However, the family's lineage from the Anckar family was considered highly questionable even at the time and was revealed as a forgery by Alf Collett in Personalhistorisk Tidsskrift in 1889, when he found court records from 1666 which showed that Peder Anker's great-grandfather «Erich Anchersen, a poor foreign Karl of Lübeck ”was found guilty of customs fraud. Erich Anckersen was the son of an anchor blacksmith and is described in contemporary sources as the servant of the Lübeck merchant Peter Bahrum. When the Norwegian family achieved naturalization, all family members changed the spelling of Anker and took a family coat of arms that was similar to the coat of arms of the extinct Swedish noble family Anckar."[6]

Empire builder and road builder "In 1791 he added Bærums Verk with associated forests, and in his last years Moss and Hakadal ironworks. He was thus one of Norway's most significant landowners. Bogstad was his main farm, which he expanded and improved in many ways. He remodeled and expanded the old baroque garden into an English-style garden. The main building from 1760, erected by the previous owner Morten Leuch, had an extension to both sides so it was approx. 56 meters long. On the outside, it was plastered or blinded, so that it looked like a brick building."[7]

"In 1788 he became titular general war commissioner and was a member of the field commissariat during the campaign in Sweden. On January 30, 1789, he was appointed general road superintendent in Akershus diocese. In this position he led most of the road construction in Norway. His main task as general road superintendent was to plan the new road facilities, and thus in particular to confer with the common people on its opinion. Together with the general road masters N. F. Krohg and G. A. Krogh, Anker has the credit for having created the Norwegian road network. By the end of the 18th century, the Trondheim main road over Gudbrandsdalen was completed after the damage it had suffered during the flood in 1789. The main road from Christiania to Western Norway, the Småland main road to Svinesund and the Bergen main road over Valdres were the major years in the road network. had come into full condition around 1800."[8]

"Anker resigned as general road superintendent in 1800, but could not detach himself from the road work. He therefore continued with royal permission to supervise the construction of new highways. The roads that were completed under Anker's plans and leadership were largely built by enlisted soldiers. They marked a major step forward in the development of Norwegian transport. Anker was also very interested in the channeling of Norwegian watercourses."[9]

"On his own property he had large technical works carried out. He built Vækerøveien from Bogstad to the shipping port Vækerø by Bestumkilen and began to build the road further north through Sørkedalen. From Bogstad to Maridalen he also built Ankerveien. In 1807 he started the construction of Kjerraten in Åsa (German: Kehrrad, 'turning wheel'), a mechanical system with chains and water wheels to transport timber from Steinsfjorden on Ringerike up the hillside to Damtjern and Storflåtan on Krokskogen for further floating down Sørkedalsvassdraget."[10]

Statesman "For his merits in 1809 Anker became a knight, later a commander and in 1812 a commander with a Grand Cross of Dannebrog. During the war years from 1807, he was close to Prince Christian August and got in touch with Swedish politicians through his son-in-law, Count Herman Wedel Jarlsberg. In 1814 he was persuaded by Prince Christian Frederik to attend the great men's meeting at Eidsvoll (often called the Notable Meeting) on ​​16 February. In the elections to the Riksforsamlingen, he became a representative of Akershus county and was later the assembly's first president. He belonged here to the Union Party, but otherwise played no prominent role. For the rest of the year, he also stayed out of political events."[11]

"After the union was established, however, he joined the new government. On 18 November, he was appointed by Carl Johan as Prime Minister and Head of the Norwegian Government Department in Stockholm. He never took a leading position in the government, but was always active as a mediator between the king and the finance minister, Count Wedel, when they disagreed. When Wedel left the government, Anker also resigned, and this was granted from 1 July 1822. He then moved back to Bogstad where he spent his last days."[12]

"Anker was one of the 41 leading Norwegian citizens who contributed to making the establishment of the Royal Frederik's University (University of Oslo) possible through donations. In 1822, Peder Anker was appointed a knight of the Order of Charles XIII."[13]

"Anker was appointed a knight of the Swedish Order of Seraphim on 28 January 1815 at Stockholm Castle. His knight plate with the family crest hangs in Riddarholmskyrkan in Stockholm."[14]

In the 1801 census he is listed at Bogstad, Aker together with his wife Anne Elisabeth and daughter Karen Christiana Andrea. They also had about 25 workers and servants in their household. [15]

Is Peder your ancestor? Please don't go away!

ask our community of genealogists a question.
Sponsored Search by Ancestry.com
DNA
No known carriers of Peder's DNA have taken a DNA test. 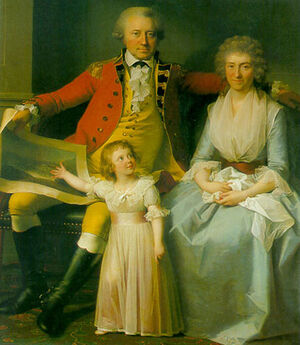 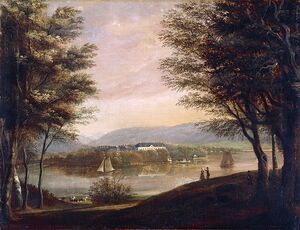 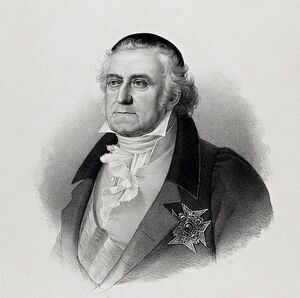 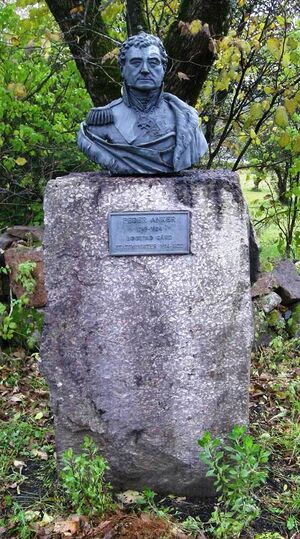