American School watercolor on paper portrait of Marie Henriette (Mary Henrietta) D’Anterroche Lyon of Elizabethtown, New Jersey, circa 1810 (prob 1817). Half length portrait of the subject at about 18 (prob 26) years of age, wearing a white dress with high collar and upswept hair, blue tasseled drapery in the background. Overall excellent condition with very slight browning to lower body near frame. Sight – 12 5/8" H x 9 1/2" W. Framed – 17 3/4" H x 14 3/4" W. Note: Marie Henriette D’Anterroche (1791-1873) was a daughter of Joseph Louis D’Anterroche (1753-1814) and Mary Vanderpoel (b. 1758), and a second cousin to the Marquis de Lafayette. Her father, Joseph Anterroche was born to a noble family in France. As the second son, he was groomed for a religious career, but ran away to join the British Army. He was captured during the American Revolution, at which time he appealed to his cousin and friend, the Marquis de Lafayette, to arrange his release. In 1780, Anterroche married Mary Vanderpoel, daughter of Captain David Vanderpoel (a staunch patriot who was initially opposed to the union). The couple raised a family in Elizabethtown, N.J., in a home known as Malherbes Mansion. D’Anterroche earned distinction fighting for the Americans in the Whiskey Rebellion and remained close with Lafayette. Upon the deaths of his father and brother, he inherited the title of the Comte D’Anterroche. In 1817, Marie Henriette married Joseph Lyon, a Colonel in the British Army who established himself in the shipping business in New York. For more on the D’Anterroche family, see Proceedings of the New Jersey Historical Society, p. 165. The D'Anterroche family in NJ was not well off so it seems more than likely that Joseph Lyon paid for the portrait when they were married or shortly before. 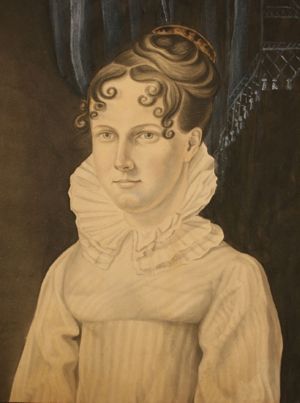