Second son of a noble family, sent to study priesthood, ran away to England and joined the British Army. Sent to America in 1777. Captured at the Battle of Freeman's Farm 09/17/1777 (near Saratoga, NY). Soon paroled by his cousin Marquis de Lafayette. Served briefly in the American army in the Whiskey Rebellion. Lived in Elizabethtown, NJ. Inherited the title of Comte D'Anterroche upon the death of his father and his older brother.

There is a lot of drivell written about this man. From approx 1784-1800 he was living an a farm in Elizabeth (not a country estate). He had no access to family wealth in France while his father and older brother were living. George Washington's correspondence shows multiple letters from Joseph's mother requesting assistance for her son to no avail. One letter from Joseph directly to Washington was of a similar nature. Family fortunes in France had to be much reduced due to the French Revolution 1789-1797.

Louis came into some wealth about 1797 after the death of his older brother and coincidentally the end of the French revolution. In 1799 he had built the DeMalhebe Mansion for his friend M. Paul De Malherbe of Martinique. 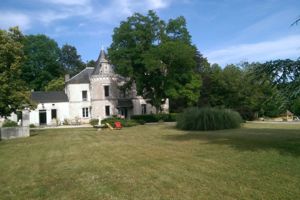