There are many legends and stories about St. Patrick, and this is his story as best it can be reconstructed.

Patrick was born around 0386 CE in lowland Scotland, probably at the site of the Roman settlement of Clotagenium, now called Old Kilpatrick in West Dumbartonshire at the western end of the Antonine Wall. His parents were Calpurnius and Conchessa, Roman citizens of some standing, living in Britain. In his handwritten "Confessio," Saint Patrick describes his father as a Deacon in the local Celtic Christian church and his grand-father, named Potitus, as a Celtic Christian Priest. From this we can assume he was baptized but he also says he was not a practicing Christian in his youth. It is reported that his mother was a close relative of contemporary theologian, St. Martin of Tours (France).[2]

Patrick's name has been called "Magonus Succetus” in Latin or "Maewyn Succat" in the proto-Welsh dialect used in the Scottish lowlands in the 4th Century. However, these words translate as: "famous warrior god" and would not have been a name in such a family.[3]

When he was about 16 years old, ca. 0402 CE, the young Patrick (however originally named) was captured by Irish pirates who often raided the western lowlands as Roman civilization was collapsing (all Roman troops were ordered back to Rome from Britain ca. 0405 CE). He was taken to north-east Ireland, known as "Dalriada," and sold as a slave whose main duties were herding sheep and pigs for a local Druid (pagan) priest for six years. It was during this time, by his own admission, that Patrick turned to the God of his fathers and developed his faith in Christ as his bulwark against the harsh treatment he underwent at the hands of his pagan captors. Clearly an intelligent lad, he also learned the Irish language (not too different from his own native pre-Welsh dialect) and about Irish customs and history. From this early knowledge, he later devised the Celtic Cross emblem, uniting pagan solar characteristics with the traditional Christian Greek cross.[4]

After about six years in captivity, young Patricius (the only name he ever used for himself, in the Confessio) heard a voice in his meditations saying "a ship is waiting" to take him home. He soon escaped and walked several days until he reached the coast where he found a ship and a captain willing to take him on, after some persuasion. After three days at sea they reached Britain where, following several adventures, he was reunited with his family. Now a fervent Christian, he studied for the priesthood, traveling to Gaul (France) to study with Saint Germanus of Auxerre, who ordained him. He became a bishop within a short time, a testimony to his faith and ability to preach. St. Germanus is known to have been in Britain in 0428-30 CE about the time Patrick was ordained a Christian bishop.[5]

Shortly after his clerical elevation, Patrick felt a renewed call to return to Ireland, this time as a respected leader who could help Irish Christians, struggling with local pagan rulers as well as seaborne invasions. He later wrote that he had a vision of "Saint Victoricus" (sic=St. Victricius) appealing to him as "The Voice of the Irish." He decided he needed to answer the call.[6]

Bishop Patricius arrived in Ireland March 25, 0433, at Slane, in County Meath.[7] A legend recounts that shortly after his arrival, he defied the pagan High King Laoire by lighting a Paschal (Easter) fire on Slane's hilltop, when the King had forbidden public bonfires because he was celebrating Spring Equinox rites at nearby Tara, just nine miles away. Patrick's Christian fire could be seen from Tara. King Laiore's attempt to kill Patrick for this insubordination led to his conversion instead after he lost control of his sword arm until he agreed to spare the Christian missionary.[8]

Even though he landed in the East, Bishop Patrick's diocese was located in the West of Ireland, precisely those areas that were least Christian in the 5th Century. He was a very successful preacher and organizer, converting thousands to Christianity and raising money from all levels of society, apparently especially from wealthy women, just as Jesus and the early disciples had done. He also converted several local chiefs and their families. Patrick also ordained many disciples, among them Beningnus, Auxilius, Iserninus, and Fiaac, (all later canonized by Rome).[9]

Bishop Patricius' mission in Ireland was not without its controversies and temporary setbacks. His "Confessio" was written to answer personally critics within the Church who opposed his financial tactics (especially accepting gifts from wealthy women converts), and suggested he had an inflated ego. Apparently his success overcame criticism as he was never convicted or seriously hindered during the four decades that he served Christ in his adopted country. Not all of his conversion attempts succeeded as quickly as he'd have liked either. He himself noted that he had suffered beatings, had been robbed on the road and once was thrown in prison by a pagan chief for two months. Fortunately, however, his Faith was always vindicated in the end, at least as recounted by later disciples and followers.

Patrick and his followers were excellent teachers, using local lore and flora and fauna to make the Gospel message come alive for Irish audiences. The common clover plant, known as a "shamrock" in Ireland, served as his main example for the Christian Trinity: Father, Son and Holy Spirit, three separate identities united in One Being. Its shiny green color and three-leaved form have been identified with the Emerald isle ever since.

After over 40 years of crisscrossing Ireland preaching his "Good News" to the Irish and establishing churches and monasteries there, Patrick is said to have died on March 17, 0461 AD/CE at the village of Saul, in County Down, where some legends say he had established his first church in the country. Although his remains have never been formally identified, it is generally accepted that he is buried at the Cathedral of nearby Downpatrick, along with Saints Brigit and Columba.[10][11]

Why are there no snakes in Ireland?

Well, of course, it’s because St. Patrick drove them from the Emerald Isle. During a forty day fast, atop a hill, some snakes made the mistake of disturbing his prayer, and Patrick using his shepard’s crook drove the snakes into the sea.

Or you can choose to believe that snakes haven't existed in Ireland, at least since the last ice age. During the time when Ireland was still connected to the main land mass, it was just too cold for snakes to live. They are reptiles, cold blooded animals. By the time Ireland warmed enough for snakes to survive, it was surrounded by water, and snakes have never learned how to use row boats.[12] 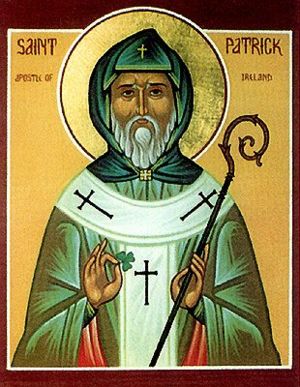 St Patrick and the Shamrock 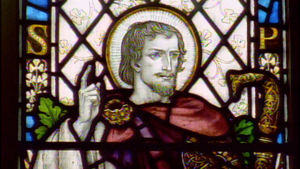 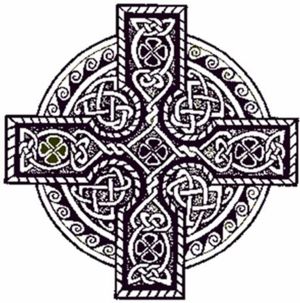 Leave a message for others who see this profile.
There are no comments yet.
Login to post a comment.
Chris Norris
Hi again Abby.

This profile needs some serious work. Their father, Calpurnius ap Heireann, according to the dates, sired his children at the ages of 10, 40 and 66 to the same wife. A very prodigious feat, for both parents I would say, assuming they were the same age. Even more remarkable if they weren't. I was recently 'dragged over the coals' for doing much less, i.e. not meeting Pre-1700 guidelines by not providing sufficient or approved sources. At least my dates were unremarkable. Many of these older profiles if studied show anomalies, going so far as to have parents younger than children, or huge age gaps like the above example. Regards, Chris.

I don't know who to report it to. But when looking at my link to St Patrick I noticed he is 56 years younger than his sister, Tigridia. Surely that is in error? His nephew is even 31 years older than him? Cheers, Chris.

Chet Snow
Hi Chris - Thank you for pointing this out - Alas, the profile in question dates from 2011 and although its manager is still active on WikiTree, it does not meet current pre-1500 standards for Sources etc. etc. And the Biography Does Also clearly state that the dates mentioned (from Ancestry.com unsourced Trees!) are in dispute.

Clearly that profile should be worked on - I hope Abby and the Team will weigh in here; right now, and as I am not an Ancestry member, I cannot get too involved.

I looked up St Patrick online. Apparently there are about three generations around him that are in (year) dispute. His birthdate was originally much earlier by about sixty years. Due to life events he performed, they brought it forward, as well as his father's, which is plus or minus twenty years out. The people adjusting his birthdate failed to do the same for his sister and her family. Hence the fifty or more year error.

Richard Devlin
Hi Chris, Chet, I'll be going over this whole family line in the next few weeks. Any help would be greatfuly accepted. Looks like lots of early unsourced GedComs with a lot of minor fixes to make them look correct. Lots of merges too.

Chris, Good catch. this is a good example of why they had to add the Pre-1500 requirements. This problem is not isolated, it's all over wikitree, and it's going to take time and people like you to bring attention to other problem Profiles. It's a slow process with so many early Gedcoms but with the great work Chet and the new Medieval Project are doing, we'll get there.

We plan on featuring St. Patrick as the Example Profile of the Week in the Connection finder on March 17th. Between now and then is a good time to take a look at the sources and biography to see if there are updates and improvements that need made, especially those that will bring it up to WikiTree Style Guide standards. We know it's short notice, so don't fret too much. Just do what you can. A Team member will check on the profile Tuesday and make changes as necessary.