Estimated dates are derived from a "date estimation scheme" based on the agreement between King Henry III and Gruffudd's wife Senena on 12 August 1241. [1]

Cawley states that Gruffydd married Senena.[2] Wikipedia adds that Senana was possibly a daughter of Caradoc ap Thomas of Anglesey. [3] Boyer refers to her as Senena ferch Caradog [4] and addresses no ancestry before Caradog. [5]

Henry III King of England made an agreement with "Senana wife of Griffin son of Llewellyn…whom David his brother keeps in prison with Owen his son" for payment of a ransom for their release, agreeing to give "David and Rothery her sons as hostages" to the king, dated 12 Aug 1241[2].

He married Elizabeth de Ferrieres, the widow of William Marshal, in 1277.

She was the daughter of William Ferrers Earl of Derby & his second wife Margaret de Quincy of Winchester, who died in 1297. [2]

In 2223 Dafydd's father Gruffudd was entrusted by Llewelyn with a numerous army to oppose William Marshall, earl of Pembroke, who had returned from Ireland to South Wales, and had taken Aberteivi and Carmarthen from Llewelyn. A battle was fought by Carmarthen with doubtful result, but lack of provisions immediately afterwards obliged Gruffydd to retire to the north. [6] This would presumably be an earlier William Marshall.

The Annals of Dunstable state that “David germanus Leulini principis Walliæ” married “filia comitis de Ferares” when recording that she was captured in 1283 with her husband and son. [2]

Dafydd had a mistress, Tangwystl ferch Owain "Fflam", with whom he had at least one child.

He also had numerous other mistresses prior to his marriage to Elizabeth and apparently had seven daughters from these liaisons.

He succeeded his brother in 1282 as Dafydd III Prince of Wales.[2]

By his wife Elizabeth de Ferrieres

Dafydd had numerous other mistresses prior to his marriage to Elizabeth and apparently had seven daughters from these liaisons.

Sponsored Search by Ancestry.com
DNA
No known carriers of Dafydd's DNA have taken a DNA test. 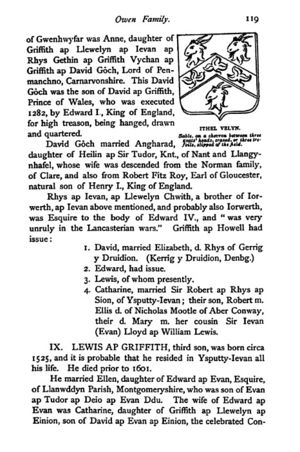 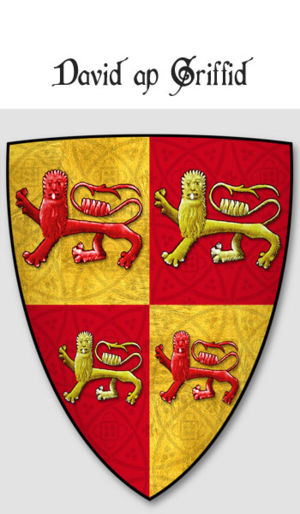 Liz (Noland) Shifflett
wikidata has no source for precise birth date & profile discusses the different years given for his birth, so I marked the dbe as false (although I did edit the profile's birth datafield from "certain" 1238 to "about" 1238).
posted Sep 12, 2019 by Liz (Noland) Shifflett

Vic Watt
Brent, I'm going to adopt Elizabeth so I can change her LNAB to conform with the new Cymru medieval Welsh naming conventions. Then I will propose a merge with another Gruffudd. Vic
posted Apr 19, 2015 by Vic Watt

Dafydd is 23 degrees from Jaki Erdoes, 22 degrees from Wallis Windsor and 9 degrees from Henry VIII of England on our single family tree. Login to find your connection.