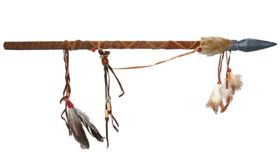 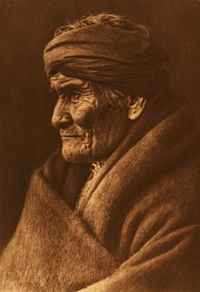 Geronimo was a leader of the [1]Bedonkohe Apache. He led his people against the military of the United States during the Apache Wars. [2] Geronimo was the name given to him during a battle with Mexican soldiers. Geronimo's Chiricahua name is Goyaałé, in english it is Goyathlay or Goyahkla. After the US Army pursued Geronimo, for over a year he surrendered, he was taken as a prisoner.

I was warmed by the sun, rocked by the winds and sheltered by the trees as other Indian babes. I was living peaceably when people began to speak bad of me. Now I can eat well, sleep well and be glad. I can go everywhere with a good feeling.

The soldiers never explained to the government when an Indian was wronged, but reported the misdeeds of the Indians. We took an oath not to do any wrong to each other or to scheme against each other.

I cannot think that we are useless or God would not have created us. There is one God looking down on us all. We are all the children of one God. The sun, the darkness, the winds are all listening to what we have to say.

When a child my mother taught me the legends of our people; taught me of the sun and sky, the moon and stars, the clouds and storms. She also taught me to kneel and pray to Usen for strength, health, wisdom and protection. We never prayed against any person, but if we had aught against any individual we ourselves too vengeance. We were taught that Usen does not care for the petty quarrels of men.

Geronimo was born near [3]Turkey Creek, Mexico. His Chiricahua name was Goyaałé meaning the one who yawns. His tribe were the smallest band of [4]Apache the Bedonkohe, where his grandfather Mahko had been chief. When Geronimos [5] father died, his mother took him to live with the Chihenne where he grew up. When Geronimo was 17 years old, he married Alope from the Nedni-Chiricahua band of Apache they had three children. On March 5, 1851, while Geronimo and the men were in town trading, 400 Mexican soldiers from Sonora led by Colonel José María Carrasco attacked Goyaałé's camp,[6] Geronimo's wife, children and mother were all killed. The Mexican government put a bounty on Apache scalps, offering as much as $25 for a child's scalp. Geronimo remembered the incident and said

Late [7]one afternoon when returning from town we were met by a few women and children who told us that Mexican troops from some other town had attacked our camp, killed all the warriors of the guard, captured all our ponies, secured our arms, destroyed our supplies, and killed many of our women and children. Quickly we separated, concealing ourselves as best we could until nightfall, when we assembled at our appointed place of rendezvous - a thicket by the river. Silently we stole in one by one, sentinels were placed, and when all were counted, I found that my aged mother, my young wife, and my three small children were among the slain.

After the loss of his family, Geronimo was overcome with grief. In Apache tradition, he set fire to his family's belongings and then, headed into the wilderness to mourn their deaths.[8]It is said, while alone Geronoimo, heard a voice that promised him No gun will ever kill you. I will take the bullets from the guns of the Mexicans and I will guide your arrows.

Geronimo then spent a number of years, seeking revenge on the Mexican army, for killing his family. He led numerous raids into northern Mexico, New Mexico and Arizona. [9]It is said he charged an entire army, armed with only a knife. It did not matter how many times, the Mexicans shot at him, he was never hit with one bullet. In battle against Geronimo the Mexican soldiers cried to St. Jerome for mercy. So Goyaałé became known as Geronimo.

Geronimo on the right, in northern Mexico in 1886. Photo taken by C. S. Fly

In 1848, the Treaty of Guadalupe Hidalgo, was signed. But the Americans made it clear that there would be no more raiding by the Apaches.[10]They set limits on where the Apaches could live and how they were to live. The Apaches, of course, had other ideas.The reservation established for the Chiricahua Apaches, in 1872, included a portion of their homeland. The Chiricahuas, were unhappy with the thought of living on any reservation. Then in the 1870's the Apaches were forced off this reservation, and forcibly removed with other Apache groups to the San Carlos Reservation, in Arizona. Geronimo hated San Catlos and resented being moved from part of his homeland. For the next 10 years Geronimo and his followers broke out over and over again, from what they thought of as a prison.The Apaches knew the country of southern Arizona and northern Mexico, so they were not easy caught, and very hard to track. 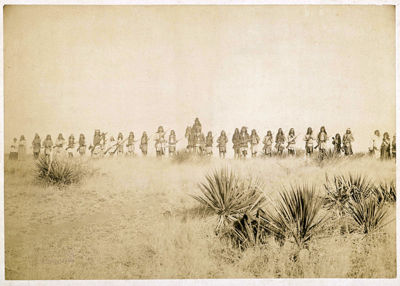 In May 1885, Geronimo and 150 Apaches, escaped for one last time. They were chased into Mexico by 5,000 U.S. army troops. In March 1886,[11] General George Crook forced Geronimo to surrender, Geronimo escaped once again, and continued his raids. Geronimo surrendered to[12]General Nelson Miles on the [13] 4th September 1886, near Fort Bowie. Geronimo and a band of Apaches were sent to Florida and then Alabama, ending up at the [14]Comanche and Kiowa reservation near Fort Sill, Oklahoma Territory. Many Apaches died from tuberculosis and other diseases at the reservation.[15]Geronimo was the last Indian warrior to surrender to U.S. Army.[16] Marking the [17] end of the Indian Wars in the Southwest. When Geronimo surrendered he had a Winchester Model 1876, lever action rifle with a silver washed barrel and receiver, Serial Number 109450. It can be seen at the United States Military Academy, West Point, New York. 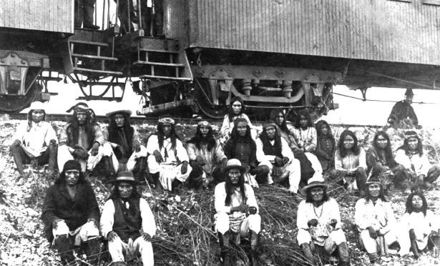 September 10, 1886, Apache Indian prisoners at rest stop, Geronimo is third from the right.

The following letter was published as "A Love Letter from Geronimo" in [18]Frank Leslie's Illustrated Newspaper, April 9, 1887

My Dear Wives, and My Son and Daughter: Are you at Fort Marion? If so, how do you like it there? Have you plenty to eat, and do you sleep and drinkwell? ... I am very well satisfied here, but if I only had you with me again would be more so.... It seems to me the Great Father and God are very closely united.I do hope he will let us see one another soon. As sure as the trees bud and bloom in the Spring, so sure is my hope of seeing you again. Talking by paper is very good, but when you see one's lips move, and hear their voice, it is much better.... I think of God, the President and you in the same light. I like you so well. When I get your letter I will think well over it. I hope you think the same of me as I do of you. I think you have influence with the sun, moon and stars.... Do what is right, no matter how you may suffer. Write to me soon a long letter. Your husband, Geronimo."

Geronimo was thrown from his horse in February 1909, he was out in the cold all night. It wasn't until the next day a friend found him very ill. He [19]died of pneumonia on [20] February 17, 1909, at Fort Sill, Oklahoma still a prisoner of the United States. On his deathbed, he told his nephew that he regretted his decision to surrender. He said I should have never surrendered. I should have fought until I was the last man alive. Geronimo was [21]buried at Fort Sill, Oklahoma in the Apache Indian Prisoner of War Cemetery. 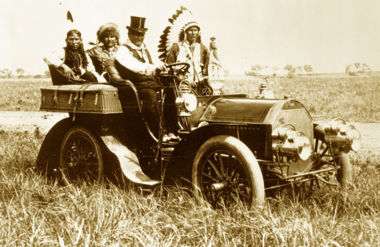 Sponsored Search by Ancestry.com
DNA
No known carriers of Geronimo's DNA have taken a DNA test. 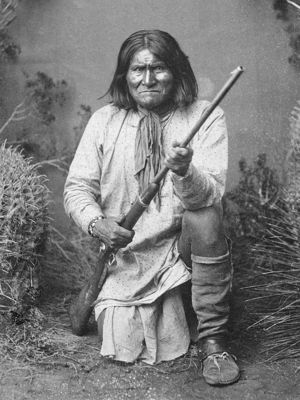 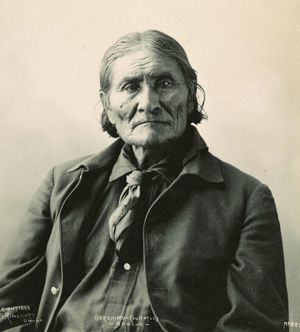 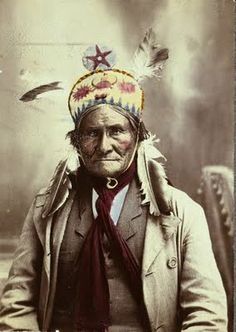 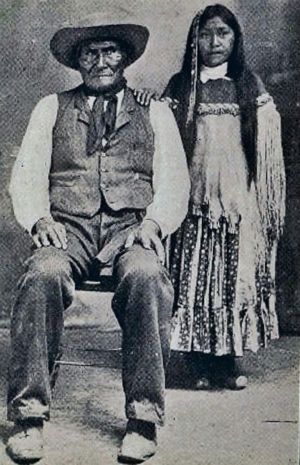 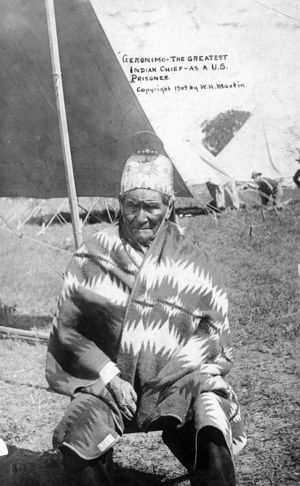 Jillaine Smith
Only one wife is mentioned in the narrative, but attached to this profile are a number of wives. What are the sources for his wives and children, please?
posted Aug 21, 2019 by Jillaine Smith