Biography of James W. APTHORPE of 1836

James W. Apthorpe grew up in the rural part of the Town of Pomfret near the village of Fredonia, in Chautauqua County, New York.

James W. Apthorpe was one of at least eight siblings, five whom served their country in the United States Civil War, and four who passed away due to sickness or imprisonment during the war.

James W. Apthorpe enlisted in the United States Army, Company I of the 112th NY Infantry Regiment in August 30, 1862 to serve three years. He lived for only another 11 months and 20 days.

James W. Apthorpe passed away on August 19, 1863, at the age of 25 years and ten months and eight days old while home on sick leave due to sickness suffered in the United States Civil War. HIs widow Mary Barden Apthorpe remarried to his brother Charles Apthorpe, Sr. 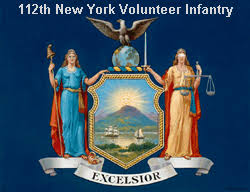 Leave a message for others who see this profile.
There are no comments yet.
Login to post a comment.
Faye (Stent) Whitfield
Apthorpe-60 and Apthorpe-27 appear to represent the same person because: They are the same person. No prompt came up when the profile was created perhaps because of the middle initial and birth place. James was born in England.
posted Sep 14, 2020 by Faye (Stent) Whitfield