Catherine (Aragón) of Aragón is Notable.

Although she had a stronger claim to the English throne than Henry VII himself,[1] Queen Catherine's impression on people, was such that even her enemy, Thomas Cromwell, said of her If not for her sex, she could have defied all the heroes of History.[2]

She successfully appealed for the lives of the rebels involved in the Evil May Day for the sake of their families. Furthermore, Queen Catherine garnered widespread admiration by starting an extensive program for the relief of the poor.[3] She was also a patron of Renaissance humanism, and a friend of the great scholars Erasmus of Rotterdam and Saint Thomas More.

b.16 Dec 1485 Archbishop's Palace in Alcalá de Henares near Madrid (at night)

p. Queen Isabella I of Castilla and King Fernando II[8]

At the start of Catherine’s reign, her Ladies in Waiting included: 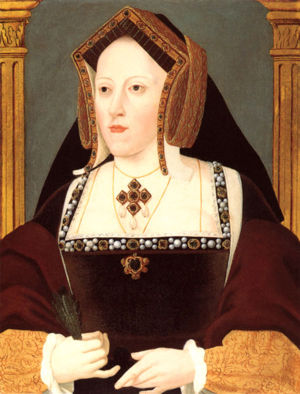 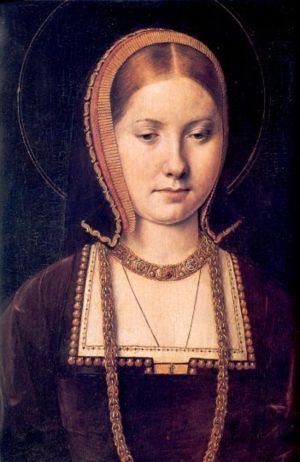 T.C. Justine Baker
Around 2001 or 2002 The Ghetty in Los Angeles, California housed the House of Aragon exhibit. AMAZING wealth, grand, luxury finest dining wares, etc. There was also a giant maybe 20ft tall tapestry of their family tree of their faces, all woven. No photography was allowed but it was spectacular to see a family tree designed like that. Anyway, it was fun to see, including the jewelry which was a beetle of some type.
posted Aug 18, 2021 by T.C. Justine Baker
Jennie Stein
There wasn't a lot of consistency in name spelling in those days, but is well-documented that she spelled her first name beginning with a K: Katherine, Katharine, Katharina--when signing letters to others, and that others did the same when writing to her, although they sometimes used other variants. Not sure exactly how to connect a source to this, as all you have to do is search google images to see her signed documents for proof. Granted handwriting then bears little resemblance to today's, so the script is a little hard to read, but you can pretty well tell the difference between a C and a K. For some reason the C error became accepted at some point and persists today in spite of modern scholarship seeming to be in agreement that it's not the correct of her name in English.
posted May 19, 2021 by Jennie Stein

Arora (G) Anonymous
documentary, some of this maybe of use to each of the wives and their children who are mentioned in this. there is also a painting shown of some of them. possibly a screen shot then cropping of each pic would be of use for some of those mentioned on their individual profiles.

Deborah Shaw
This is picky and may be impossible to fix  I've played "find the pea" with name fields to get them to display as I want w/o luck  but "of Aragón" in the sub-hed LF because it mixes Spanish with English, and it also LF for her sibs in the sib links, whom I doubt all used English names as she did. "John" for example should probably be changed to "Juan de" to display properly.

Per Wikipedia (I know, I know), her first name is Catalina in Spanish. There may be a way to double the aka to read:

aka Catherine of Aragon aka Catalina de Aragón

The 2= hed under the TC should also be changed to Catherine of Aragon, & while you have the edit tab open, you could change the comma before fn [1] to a full stop.