NOTE: no record of joining the service for WWII..or later

Ivan was the first husband of Laura Wheeler, he is buried in the family plot next to Mark W. and Anna Wheeler, Laura's Father & Mother. AND on the Mark/Anna graves is an arched rod going from one to the other, appearing to be connecting them. Ivan also has one of these arched rods going from his grave to a rod/what appears to be a headstone...

His wife Laura remarried Acree and is buried quite away north of him with her 2nd husband. I wonder if this Unknown grave could be a child of his/Laura's? Even though his obit states they only had one son who survived him, Ardell maybe they had one that was taken in infancy.???

Arfsten Winner Of Pentathlon Event "Fleet Ardell Arfsten, DCHS speed-merchant of the past season, tried his hand at something new last Saturday and wound up with a huge and beautiful trophy in his possession. Arfsten was the winner of a Pentathlon meet hosted by the Federal Correctional Institution of Denver. The Pentathlon, explains Coach Theriault, is a grueling athletic contest comprised of five different events and won by the man having the highest total points. Ardell left his Jeffererson County competitors far in arrears as he amassed the staggering sum of 1,120 points while weathering a succession of events which included the Shot Put, Broad Jump, 100 yd. dash, 180 yd. low hurdles, and the 440 yd. dash. Marvin Kenner was the only other D C H S entry and he finished in a commendable fourth place . Arfsten isn' t through yet, either. as a member of the National Guard, he is, slated to flash his form in a series of Army meets at Fort Carson this summer."

Ardel Arfsten , Deputy in Sheriff Hammond s office , has received his U . S . Federal Aviation Agency Commercial License . This license permits him to fly either a single or multiple engine aircraft . A U . S . Government Inspector administered the final test . The receiving of his pilot s license culminated 3 years of flying practice and home study courses for Arfsten .

[5] FUNERAL SERVICES FOR IVAN ARFSTEN TO BE HELD AT ANDREWS SATURDAY , MARCH 21 1953

"Funeral services will be held at Andrews Funeral Home at 2 Pm. Saturday, March 21, for Ivan 'Ick' Arfsten who died Tuesday afternoon of a heart attack. Arfsten had been spraying cattle at the McKinster ranch near Bennett when he become Ill and died as he was being rushed to a Beaver hospital. Interment will be ln the Franktown cemetery . Ivan Arfsten was born February 4, 1916, in Limon, Colorado, where he spent his early years. He attended high school in Pueblo, taking an active part in athletics, especially baseball, which he continued to play for several years after hie graduation. As late as two years ago he was a regular player with the Elizabeth team. Since coming to Douglas county in 1933 , Arfsten has been engaged in farming until two years ago when he began operating the cattle spraying machine for the Douglas County Livestock Association . Last year he operated his own spraying outfit and was Just beginning this years operations at the time of his death. On May 28, 1936, Ivan was married to Laura E . Wheeler of Franktown. The couple have one son , Ardell E., who is a freshman at Douglas County High School. He ls also survived by his parents, Mr and Mrs. Alfred Arfsten of Denver, and 2 sisters, Mrs. Aldyth Williamson of Denver and Mrs. Erma Johns of Moorestown, New Jersey."

Is Ivan your ancestor? Please don't go away!

ask our community of genealogists a question.
Sponsored Search by Ancestry.com
DNA
No known carriers of Ivan's DNA have taken a DNA test. 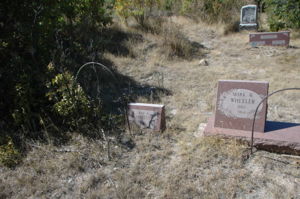 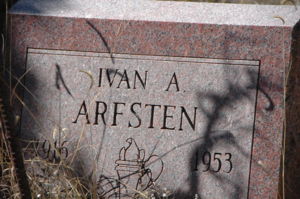 a Loved one next to Ivan 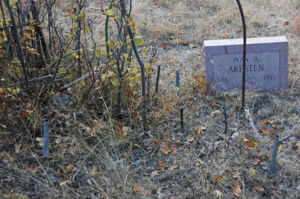 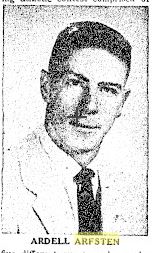