At the time of the 1881 England Census Mary was 5 years old, living in Ilkeston with her parents William (boot and shoe salesman) and Agnes Argile and four siblings. [4]

In 1891 Mary was 15, living with her parents William and Agnes Argile and eight siblings. Father William was a shoe maker and her three oldest brothers were coal miners. [5]

In 1901 at the time of the England Census, Mary (age 26) was at home at 5 Northgate Street, Ilkeston with her two children Thomas (3) and Agnes Gertrude (2). (Her husband Thomas Matthews was boarding in Leicestershire, England, presumably for work.) [7]

Two spellings of Argile / Argyle seem to have been used fairly interchangeably in the records.

On census returns Mary's birthplace was Ilkeston but her birth was registered in Basford; Basford was part of Derbyshire until 1.1.1937, and Ilkeston was not a registration district until 1938, created out of Shardlow and Belper so this seems reasonable. [10]

I have a copy of the census return for the family in 1911 but cannot find it at family search or freeCEN so cannot include a reference that is not behind a paywall (Humphrey-6461, July 2018). 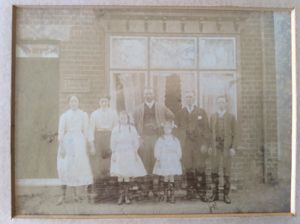 Mary is 35 degrees from Danielle Liard, 34 degrees from Jack London and 27 degrees from Henry VIII of England on our single family tree. Login to find your connection.