Count of Provence William II was born circa 0950 in Provence, France. He died at Avignon, France in 993, after August 29, while a monk there.

He was also known as Comte de Provence William d'Arles. He was successively Count of Avignon (962), Count of Provence (972), Marquis of Provence Arles (979) and Prince of all Provence (991).

William married secondly to Adelaide of Anjou. He and Adelaide had a son, Count of Provence William III (c 986) and a daughter, Constance of Provence (c 986).

His parentage has been subject to reevaluation. He has traditionally been called son of Raymond III Pons and Garsinda. However, recent research has revealed that William was instead son of Adelais of Anjou, known to have married a Raymond, "Prince of Gothia." This discovery has required a complete reevaluation of the succession to the County of Toulouse during this period, and no scholarly consensus has developed. (Ref: Wikipedia)

Some historians have suggested a single additional generation (referred to as Raymond III of Toulouse, his father Raymond Pons being stripped of an ordinal), while others follow the Codice de Roda in giving Raymond Pons a son Raymond who in turn had sons Hugh and Raymond. Identifying the last with the husband of Adelais inserts two generations, making William the great-grandson of Raymond Pons. Yet another reconstruction suggests that Raymond and Garsinda died childless, and that Toulouse passed to kinsman Raymond II of Rouergue, from whom the husband of Adelais would descend. See Martin de Framond, "La succession des comtes de Toulouse autour de l'an mil(940--1030): reconsidérations", Annales du Midi 204 (1993), pp 461--488; Thierry Stasser, "Adélaïde d'Anjou. Sa famille, ses mariages, sa descendance", Le Moyen Age 103,1 (1997): 9-52

Note: Stuart calls him Count of Provence and Arles and Marquis of Provence. Acccording to him, William died a monk at Avignon. Stuart's date for his birth is circa 955, and death 994.

His first wife was Arsinde, possibly the daughter of Arnold de Comminges. See Foundation for Medieval Genealogy, at http://fmg.ac/Projects/MedLands/PROVENCE.htm#_Toc220666442.

His second wife was Blanche of Alix of Anjou. Lastly married Adelaide d'Anjou.

This page has been edited according to Style Standards adopted January 2014. Descriptions of imported gedcoms for this profile and changes are under the Changes tab. 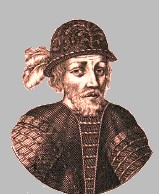 Leave a message for others who see this profile.
There are no comments yet.
Login to post a comment.
[Living Sälgö]
.
posted Oct 02, 2016 by [Living Sälgö]

John Atkinson
I think his LNAB also needs to be changed perhaps to Arles http://home.earthlink.net/~henryproject/hproject/prov/willi002.htm
posted Aug 27, 2016 by John Atkinson

John Atkinson
It looks like this profile has become a mixture of Guillaume, Marquis of Provence see here http://home.earthlink.net/~henryproject/hproject/prov/willi002.htm and Guillaume III Comte de Toulouse.
posted May 14, 2016 by John Atkinson

NOT Taillefer, despite the incorrect information that remains below as of this writing. Someday we'll clean this up--until then, see the linked page on FMG.

William is 28 degrees from Laurie Giffin, 41 degrees from Toni Morrison and 16 degrees from Henry VIII of England on our single family tree. Login to find your connection.